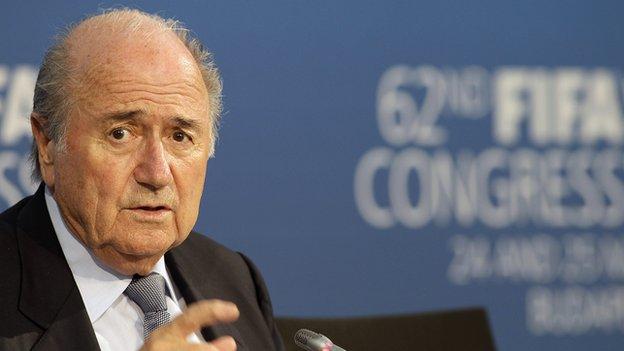 Football's governing body, Fifa, has confirmed to BBC Scotland it has been in contact with the Scottish FA regarding Rangers.

A spokesperson said letters and phone calls have been exchanged, and that its legal teams will continue to talk and look further into the situation.

The Ibrox club had a 12-month transfer embargo imposed by the SFA overturned by the Court of Session.

Fifa has already intimated its unhappiness with Rangers taking their dispute with the SFA to a civil court.

Prior to the court's decision, a Fifa statement said: "Fifa will ask the member association (SFA) to take action so that the club withdraws its request from the ordinary courts.

"Fifa will closely monitor the situation so that the issue is resolved as fast as possible."

Rangers had been handed the transfer ban and a £100,000 fine by the SFA tribunal for bringing the game into disrepute since Craig Whyte's takeover in May 2011.

However, at a Judicial Review, Lord Glennie stated that the decision to uphold a transfer embargo on Rangers was beyond the powers of the SFA appeal tribunal, headed by his fellow Court of Session judge Lord Carloway.

The court proposed that the matter should be returned to the SFA appeal stage and the SFA has decided not to appeal the verdict.

"Football must always operate within the law of the land," said SFA chief executive Stewart Regan.

"The right of appeal is now open to the Scottish FA through the Court of Session. However, by so doing, the very principles on which the Scottish FA - and, for that matter, Uefa and Fifa - are founded, namely football disciplinary matters being dealt with within its own jurisdiction, would be fundamentally compromised.

"Details of a new hearing date will be confirmed in early course."