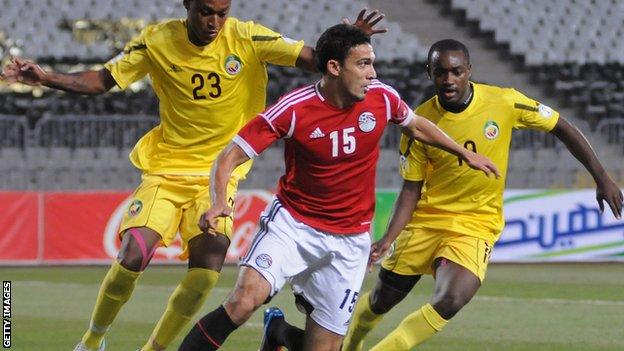 Egypt began their World Cup campaign with a 2-0 victory over Mozambique in a virtually empty stadium in Alexandria.

In the country's first game at home in eight months, Mahmoud Fathallah and Mohamed Zidan scored twice in nine minutes early in the second half.

Ghana beat Lesotho 7-0 in a match that was delayed for nearly 90 minutes after a floodlight failure in Kumasi.

The Black Stars were already 4-0 ahead in their Group D opener when the lights failed in the 55th minute.

Egypt were forced to play their Group G encounter behind closed doors because of a Fifa ban after the Port Said stadium riot in February that caused the death of 74 people.

The Pharoahs' American coach Bob Bradley, in his first competitive fixture in charge, was relieved with the result after a poor first-half performance.

"In the first half we created some chances but when they weren't successful they got nervous," he said.

"But we spoke to the players and told them to focus and calm down, and they performed better."

Ghana were playing their first competitive game under coach Akwasi Appiah who replaced Serb Goran Stevanovic, sacked after a disappointing fourth-placed finish at the 2012 Africa Cup of Nations.