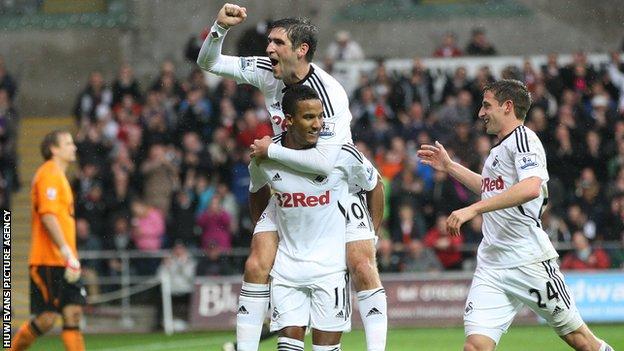 Swansea City say new Liverpool manager Brendan Rodgers will not be able to sign any of his former players for the next 12 months.

The Swansea chairman, Huw Jenkins, says a "player protection" clause was included in the compensation package that released Rodgers from his Liberty Stadium contract to join Liverpool.

"We have got some protection, which I think is the right thing," he said.

Liverpool paid £7m compensation to the Swans for Rodgers' services.

Swansea released a statement after Rodgers was presented as the new Liverpool manager to counter speculation that a trio of Swans - midfielder Joe Allen, defender Ashley Williams and full-back Neil Taylor - are transfer targets.

Jenkins has made it clear that Liverpool have agreed not to raid the Liberty Stadium for playing talent to follow Rodgers to Anfield.

Doubts have also been raised over Gylfi Sigurdsson's proposed move to Swansea, despite the club agreeing a fee of £6.8m to buy the 22-year-old from German club Hoffenheim.

But Jenkins insisted that personal terms have been agreed with the Iceland midfielder, who impressed during a loan spell in south Wales last season.

"We've done all we can with Gylfi agreeing terms and a fee, but he's gone away on holiday which has delayed things a bit," said Jenkins.

"However, we are hopeful of getting things tied up next week."