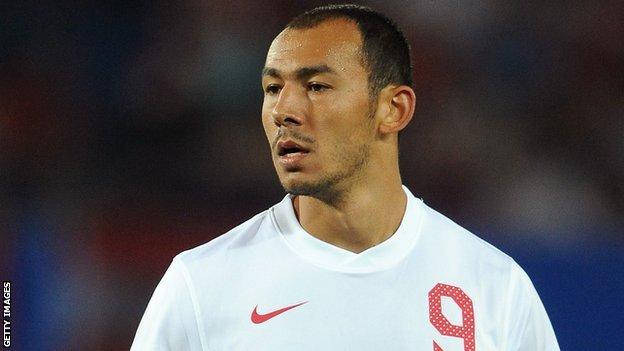 The visitors led 2-0, and although Nani replied, a Pepe own goal sealed victory in one of five games on Saturday featuring England's fellow qualifiers.

European Championship co-hosts Poland, who kick-off Euro 2012 when they face Greece on Friday, coasted to a 4-0 win over Andorra.

Ludovic Obraniak opened the scoring and efforts from Robert Lewandowski and midfielder Jakub Blaszczykowski made it 3-0 by the interval. Marcin Wasilewski added a fourth in the second half.

Denmark beat Australia 2-0 to round off their Euro 2012 preparations in style in front of their home fans in Copenhagen.

Liverpool's Daniel Agger netted the first, converting a first-half penalty after being fouled in the area, and his centre-back partner Andreas Bjelland made it 2-0 after the break when the visitors failed to clear a corner.

Croatia had to settle for a 1-1 draw away in Norway. Striker Eduardo da Silva put the visitors ahead 11 minutes from time but Tarik Elyounoussi struck in injury time for the hosts.

On Friday, Italy's troubled build-up continued with a 3-0 defeat at the hands of Russia.

Coach Cesare Prandelli had already said he would not have a problem if Italy withdrew from Euro 2012 amid match-fixing allegations in the domestic league.

The Italians showed little prospect of ignoring the off-pitch scandal as they were brushed aside in Zurich's Letzigrund stadium.

Russia, who will line up in Group A alongside Poland, Greece and the Czech Republic, had the better of the first half but had to wait until just after the hour to take the lead when the unmarked Alexander Kerzhakov shot home from 15 yards.

A mix-up between substitute goalkeeper Morgan De Sanctis and Christian Maggio allowed Roman Shirokov to score the second into an empty net, and another Maggio mistake gifted Shirokov an 89th-minute header to seal the win.

The only bright spot for the Italians was the return of striker Antonio Cassano, who played his first match for his country since October. Cassano was sidelined for five months following minor heart surgery but looked sharp in attack alongside Manchester City's Mario Balotelli.

Elsewhere, there were defeats for England's Group D opponents Ukraine and the Czech Republic.

Co-hosts Ukraine lost 3-2 against Austria in Innsbruck. The Austrians were twice in front but goals from Oleh Gusyev drew Ukraine level on each occasion. However, Marko Arnautovic's second goal of the game gave the hosts victory.

The Czech Republic were beaten 2-1 by Hungary in Prague.

The hosts fell behind to Balazs Dzsudzsak's quickly taken free-kick and, although centre-back Michal Kadlec equalised from the penalty spot and they had the better of the game, substitute Adam Gyurcso hit a late winner for the Hungarians.