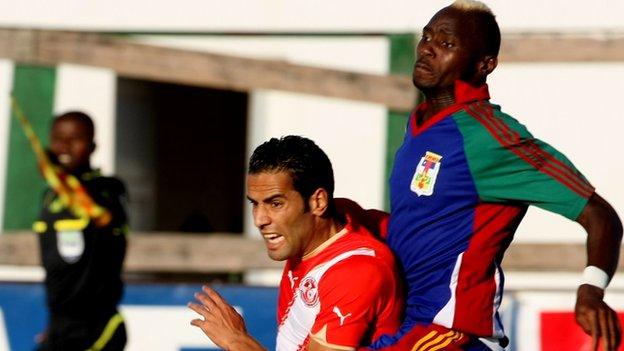 Kethevoama Foxi was the hero, scoring in each half to sink a side that played at this year's Africa Cup of Nations.

Central African Republic joined Fifa in 1964 but have missed several World Cup qualifying campaigns for a variety of reasons.

The team last played a World Cup qualifier in 2000, losing 4-1 to Zimbabwe in the first round.

The BBC's Crispin Kette says exuberant celebrations broke out at the final whistle inside the Bangui stadium, as some fans ripped off their shirts while others waved the national flag.

The win represents a significant achievement for coach Herve Loungoundji, who only took charge late last month after French coach Jules Accorsi resigned in a row over money.

Accorsi had guided the team since August 2010 until last month, leading them from 202 in the world to 123 according to football's world governing body Fifa.

During that time, Central African Republic beat Algeria in an Africa Cup of Nations qualifier in October 2010.

The 2-0 victory was only their second qualifying win in history, and their first since 1973.

Defeat for Botswana, meanwhile, continues a miserable run for the Zebras since they contested their maiden Africa Cup of Nations earlier this year.

The national squad has been plagued by retirements, bonus rows and poor administration since they exited the Nations Cup in the first round in January.

South Africa host Ethiopia on Sunday in the weekend's other Group A tie.