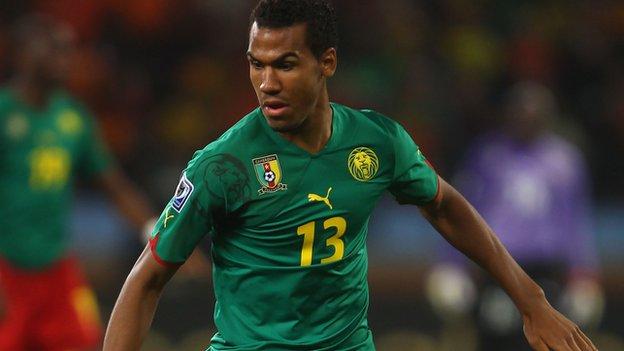 Cameroon began Group I in solid fashion when beating DR Congo 1-0 in Yaounde.

Eric Choupo-Moting made the breakthrough after 57 minutes, converting a penalty after he himself had been fouled in the build-up.

Goalkeeper Carlos Kameni captained the side in the absence of Samuel Eto'o, who is serving an eight-month ban from the national team.

"We've won the game, this is a good start but much still needs to be done," said Cameroon coach Denis Lavagne.

"We need to press from the beginning to the end."

The stadium was only half full for the first competitive game since failing to qualify for the Africa Cup of Nations.

Although Cameroon had most of the possession in the first half, it was the visitors who created the best chances but Kameni denied them with two fine saves.

Shortly into the second period, Choupo-Moting showed that there is life without Eto'o as he scored his second match-winner in as many competitive games.

The Germany-based footballer was the hero for the Indomitable Lions in February, when grabbing a late winner in Guinea-Bissau in a 2013 Africa Cup of Nations qualifier.

Eto'o is serving his suspension following his part in a national team strike.

In the weekend's other Group I game, Togo host Libya on Sunday.