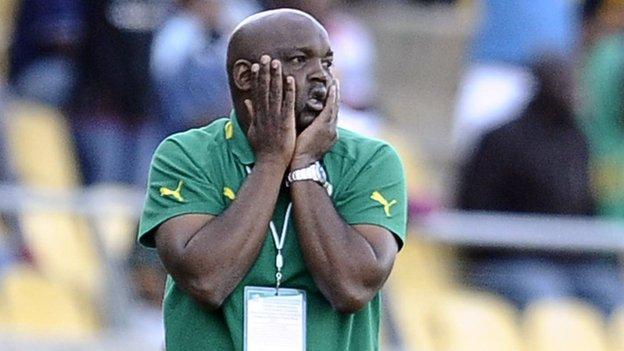 South Africa left it late to save themselves from a shock defeat by Ethiopia on Sunday as qualifying continued for the 2014 World Cup.

With only 13 minutes of the game remaining, Katlego Mphela scored an equaliser to give Bafana Bafana a point.

But the result will have increased pressure on coach Pitso Mosimane, who has now failed to steer his side to victory in his last seven official matches.

In Sunday's other game, Niger and Gabon drew 0-0.

Ahead of South Africa's game with Ethiopia in Rustenburg, the Bafana Bafana coach Mosimane said only a win would do.

But instead of the hosts, ranked 67th in Fifa's world rankings compared to their 138th-placed opponents, achieving that target they almost suffered an embarrassing defeat.

Said Saladin scored in the first half to give Ethiopaa deserved lead and it looked like Bafana Bafana's bad run - five draws and two defeats in their last seven games - would continue.

But Mphela curled in a shot in the 77th minute to snatch a 1-1 draw, sparing the blushes of South Africa and preventing Ethiopia from securing what would have been only their second away win in four decades of World Cup qualifying.

After the game, Mosimane hinted that his team may have suffered from complacency.

"Our guys thought it was going to be easy but we must give our opponents credit," he said. "Maybe this is a wake up call."

The decline in South Africa's fortunes since hosting the 2010 World Cup, including missing out on qualifying for the 2012 African Nations Cup finals because they misread the rules, meant only about 5,000 spectators turned up to watch the game.

Kethevoama Foxi grabbed a goal in both halves to spark the celebrations in a nation that has now recorded just two qualifying victories in 39 years.

Africa Cup of Nations co-hosts Equatorial Guinea took a surprise lead in Tunisia on Saturday before going down 3-1 to a side bidding to reach its fifth World Cup tournament.

The National Lightning led at the break, after Ruben Epitie's 34th-minute goal, but the Carthage Eagles hit form in the second half as Issam Jomaa (51), Hamdi Harbaoui (56) and Chedi Hammami (88) all scored.

Sierra Leone were stronger so the result is a fair one

The Carthage Eagles lead the group on goal difference from Sierra Leone, who beat Cape Verde 2-1 in Freetown, also on Saturday.

Mohamed Kamara opened the scoring direct from a corner after just 10 minutes before Sherrif Suma's acrobatic strike after 26 minutes doubled the lead.

Ze Luis pulled a goal back four minutes into stoppage time but it was too little too late as the Leone Stars held on.

"I think we played well from the first minute until the end of match, with a good balance of offense and defence. But Sierra Leone were stronger today so the result is a fair one."

Just five days after taking charge, new Ivory Coast Sabri Lamouchi led his new side to a 2-0 win over Tanzania in Abidjan.

Didier Drogba put his penalty miss in the Nations Cup final behind him as he scored after 76 minutes, with fellow Chelsea departee Salomon Kalou having given the Elephants the lead after 18 minutes.

"It was a very difficult game but the most important thing was to take the three points," said Drogba, after Saturday's match.

"The manager only had three days with us, but we won the game so it is good work by him. Now we have some time to work and try to improve on what we did. We will prepare for the game against Morocco and see what we can do."

Bidding for a third World Cup in a row, the Ivorians are two points clear in the group - after The Gambia and Morocco played out a 1-1 draw in Banjul.

Abdou Jammeh gave the Scorpions a 16th-minute lead to give new Italian coach Luciano Mancini a bright start in his first game in charge.

However, Houssine Kharja, one of the Atlas Lions' few bright sparks in the Nations Cup, equalised fourteen minutes from time.

The Chipolopolo suffered in the heat of Khartoum where Sudan won 2-0. Muhanad Tahir opened the scoring and Seifeddin Ali doubled their advantage to give Sudan a shock result.

A stunned Zambia left without talking to the media after the game on Saturday.

Despite home advantage, Burkina Faso could only draw 0-0 with Congo in Ouagadougou.

Niger and Gabon fared no better on Sunday in Niamey, also drawing 0-0.

Moussa Maazou had the chances to give Niger a victory that would have sent them top of the table but was unable to make any count.

As it stands, it could not be tighter in the group.