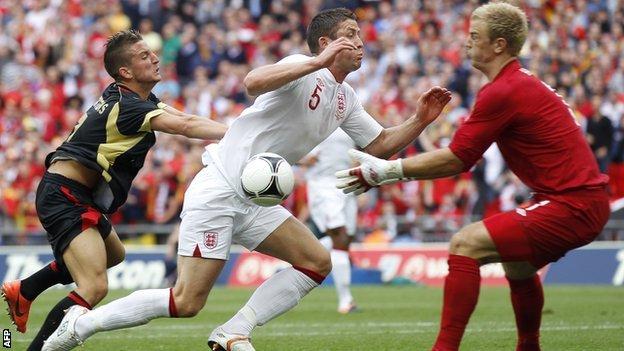 Roy Hodgson has been accused of disrespecting Rio Ferdinand after overlooking the defender for Euro 2012, despite an injury to Gary Cahill.

Cahill, 26, was ruled out with a double fracture of his jaw after colliding with goalkeeper Joe Hart during the friendly win over Belgium on Saturday.

Liverpool's Martin Kelly has been called up as his replacement.

"It's a lack of respect. He wants to play," Ferdinand's representative Jamie Moralee told BBC Sport.

"Rio's very disappointed. He thought he had done enough. It's very difficult to accept.

"This is a player with 81 caps for his country. I don't know anyone who understands it. It's not been handled in the right way."

Meanwhile, John Terry has been given the all-clear after a scan on a hamstring injury.

Liverpool full-back Kelly, 22, who made his international debut as a substitute against Norway last weekend, was on the stand-by list. The call-up is subject to Uefa approval.

Former captain Ferdinand, 33, has won 81 caps for his country but was left out of Hodgson's initial squad.

England coach Hodgson said the decision was for "footballing reasons" and not as Terry is due to stand trial in July over a charge he racially abused Ferdinand's brother Anton. Terry denies the charge.

The Manchester United defender has been hampered by back problems in recent years and club manager Sir Alex Ferguson said in May: "You play something like a game every four days. Rio Ferdinand couldn't do that."

However Ferdinand made 30 Premier League appearances last season, the most times he has featured in a campaign since 2007-08.

Cahill looked in line to start alongside Chelsea team-mate Terry against France in England's Euro 2012 opener in Donetsk on 11 June, but his absence now opens the door for either Manchester City's Joleon Lescott or Everton's Phil Jagielka.

Who is Martin Kelly?

Manchester United's Phil Jones is the only other recognised central defender - though he may be needed in midfield following the injuries to Lampard and Barry.

Cahill collided with Hart after a push from Belgium winger Dries Mertens in the 17th minute at Wembley.

An FA statement said: "Cahill has two fractures of his jaw, one either side.

"The England medical team have been in close contact overnight with Cahill's club doctors who will treat him moving forward."

Hodgson said after the game: "I wasn't too happy about the challenge. The referee gave him a yellow card, which he deserved."

PSV winger Mertens has apologised on his Twitter page.

He said: "I sincerely apologise for the harm I've cost to Cahill. When in the heat of the moment, you often don't think about the consequences.

"My thoughts go out to him and I hope he recovers well."

Kelly's call-up means that there are now six Liverpool players in the 23-man squad travelling to Ukraine and Poland - more than from any other club.

Fifa have confirmed that Mertens will not face restrospective action as the incident was seen by the referee at the time.