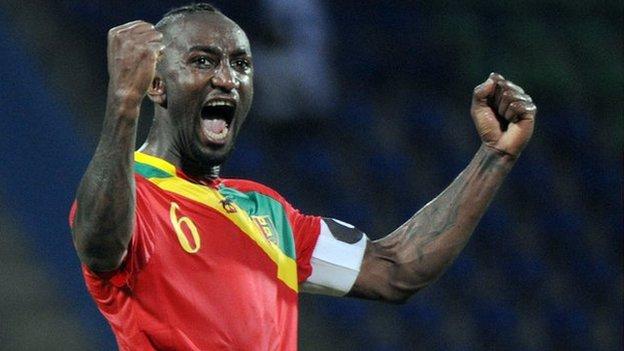 Guinea made a great start to their qualifying campaign for the 2014 World Cup in Brazil by coming away from Zimbabwe with a 1-0 win and all three points on Sunday.

Having never qualified for the World Cup, Guinea will be delighted with a result that puts them level on points with Egypt at the top of Group G.

Also on Sunday, Uganda scored a late equaliser to deny Angola and Nigeria struck late on to beat Namibia.

Nigeria came up against stubborn resistance from a well-drilled Namibia side and it took them until the 80th minute to make the breakthrough.

Ikechukwu Uche beat one defender before cracking in a shot with his left foot to give Nigeria a 1-0 win in Calabar that sends the Super Eagles to the top of the table.

Kenya's bid to reach a first World Cup got off to a poor start when being held to a goalless draw by Malawi in Nairobi on Saturday.

The hosts struggled to create chances in a match where security was tightened following recent terrorist attacks in the Kenyan capital.

We played better than Guinea but they converted their only chance

After Egypt beat Mozambique 2-0 on Friday, group rivals Zimbabwe and Guinea knew that a big win in Harare would take one of them top of the table.

That proved elusive, however, with only a single goal scored by Ibrahima Traore separating the sides. The VfB Stuttgart player fired in a first-half free-kick to put his side ahead and some resilient defending thereafter helped them secure a 1-0 victory.

During the game Zimbabwe fans made their disappointment heard by venting their anger at coach Rahman Gumbo and shouting "Mapeza", calling for the return of Norman Mapeza, who is suspended while a match-fixing investigation is ongoing.

"We came here to take three points and we made it," Zayatte told BBC Sport. "We played against a good team, they played strong and had a lot of chances but our goalkeeper made some great saves."

Zimbabwe striker Knowledge Musona, who missed several clear chances and had a goal disallowed, felt his side deserved more than they got.

"We were not lucky and we just have to keep going and try to perfect taking our chances in front of goal," he told BBC Sport. "We played better than Guinea, but they converted the only chance that they got."

Algeria recorded the biggest victory on Saturday, as they thumped Rwanda 4-0 in Blida.

Sofiane Feghouli opened the scoring before El Arabi Soudani netted twice - either side of a strike from substitute Islam Slimani.

The North Africans contested the last World Cup in South Africa two years ago but failed to build on that appearance as they missed out on this year's Africa Cup of Nations.

On Sunday, Benin took on Mali in what proved to be a much closer match in Cotonou.

Benin struck early when Razak Omotoyossi broke the offside trap to fire home after 18 minutes and the Squirrels held on to secure a 1-0 victory.

They now trail the Desert Foxes on goal difference.

Cameroon put the disappointment of missing this year's Africa Cup of Nations to one side as they began their Group I campaign with a 1-0 win over DR Congo in Yaounde on Saturday.

Germany-based striker Eric Choupo-Moting grabbed the only goal of the game shortly before the hour when converting a penalty that he had won.

"We've won the game, this is a good start but much still needs to be done," said Cameroon coach Denis Lavagne afterwards.

On Sunday, Togo and Libya cancelled each other out and took a point apiece after a 1-1 draw in Lome.

The hosts struck first when Kalen Damessi found the back of the net after only eight minutes. The lead lasted just seven minutes, though, Ahmed Zouay notching for Libya to restore parity.

The Hawks, who contested the 2006 World Cup in Germany, missed several chances in the second half, prompting Libya to celebrate as though they had won the game when the final whistle blew.

Emmanuel Okwi scored in the 87th minute to earn a point for Uganda away to Angola as the teams drew 1-1 in Luanda on Sunday.

The Palancas Negras opened the scoring through Djalma Campos, who converted Mates Galiano's right-wing cross, but they could not hold on.

On Saturday, Senegal conceded an early goal at home to Liberia but recovered to win 3-1 in a first competitive match in charge for stand-in coach Joseph Koto.

Koto was appointed after Frenchman Pierre Lechantre turned the job down and the Senegalese would have been dismayed to see Francis Doe open the scoring after just two minutes.

I want to thank the players

The Teranga Lions' poor start continued when new captain Papiss Demba Cisse missed a penalty only for Ibrahima Balde to calm nerves as he levelled before the break.

The Lone Star were reduced to 10 men on the hour and eleven minutes later, substitute Dame Ndoye fired home before Olympic Games-bound Sadio Mane scored in only his second Senegal appearance.

"Playing again without a big crowd was very difficult," said Senegal coach Koto. "From the start, I told the players to prepare for a difficult match.

"I want to thank the players who played well and with professionalism. It was a difficult game at the end of a long season but we tried to control it."

Liberia coach Kaetu Smith still managed to take some positives from the defeat.

"We are a young team with a bright future," he said. "As you can see we didn't come here to be negative, we approached the game positively.

"We made individual defensive errors but despite that, we continued to press and play beautiful football and we will continue to do that."