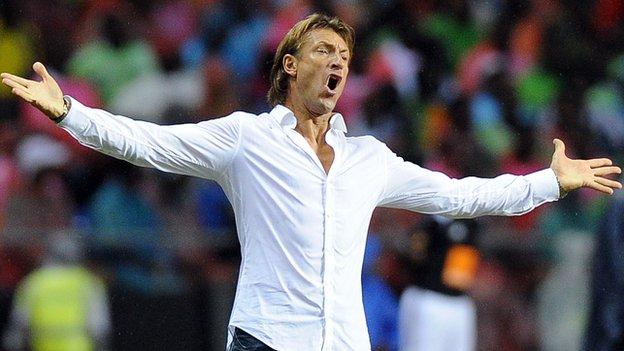 African champions Zambia were desperately poor as they slumped to a 2-0 defeat against Sudan in their opening 2014 World Cup qualifier on Saturday.

The side that thrilled the continent and the watching world as they won the Africa Cup of Nations earlier in the year simply could not get going against their Group D opponents.

In the first half Zambia sat back and looked to hit the Sudanese on the counter-attack.

Rainford Kalaba's pace occasionally caused anxiety on the left, but the Chipolopolo managed only one shot on target.

Coach Herve Renard switched things round in the first half, rotating his attacking midfielders Kalaba and Chris Katongo.

But Zambia were not on championship form.

They conceded far too much possession to the Sudanese, who had the advantage of playing in front of their noisy fans in the Al Hilal stadium in Omdurman.

Some Zambian supporters have also suggested the heat in Sudan could have wilted their team.

But that is not the sort of excuse the African champions should be making.

Things got worse for Zambia after the interval.

The solid centre-backs Stopilla Sunzu and Hichani Himoonde had coped with most things the Sudanese had thrown at them, though they were uncomfortable when drawn out on the wings against the speedy Sudanese front men.

But Himoonde's clearing header went straight down the middle of the pitch, allowing Muhanad Tahir to take a touch and then crash in the first goal.

The goalkeeper Kennedy Mweene seemed to be still talking to his defence when Haitham Mustapha swung a corner in.

Mweene came halfway and was caught out of position, allowing Seifeddin Ali to head home.

From there Zambia were up against it. And their attempts to chase the game were not productive.

Captain Chris Katongo twice put in poor crosses when in a decent position, indicative of a greater collective malaise.

The Chipolopolo simply didn't create many good chances against the resolute Sudanese.

At the end Sudan's coach, Mohamed Abdallah 'Mazda' was carried through the corridors of the stadium on the shoulders of his delirious fans.

"It's very big, because Zambia are the African champions. Don't forget we lost in the quarter-finals against them," Mazda told the BBC.

"It showed we can play football. We can go to the finals of the next African Cup of Nations, and the road to the World Cup is now open."

But what of Zambia now?

Zambia coach Renard had made only one change from the team that beat Ivory Coast in the Africa Cup of Nations final in February.

Despite - or perhaps because of - that success, Renard had warned before the game that his players must not be too confident.

"We were the best for one tournament but I'm really sure we are not the best team in Africa," Renard told BBC Sport.

That certainly seemed true for the Zambians in Omdurman on Saturday.

Perhaps it is difficult to motivate yourself so soon after a great triumph.

But the Chipolopolo will have to pull themselves together before a massive game against Ghana in Ndolo next Sunday.

An away loss can be forgiven - but in a tight group, in which only one side qualifies for the final round of World Cup qualifiers, it is imperative to win at home.

It is high time Zambia rediscovers its championship-wining form.