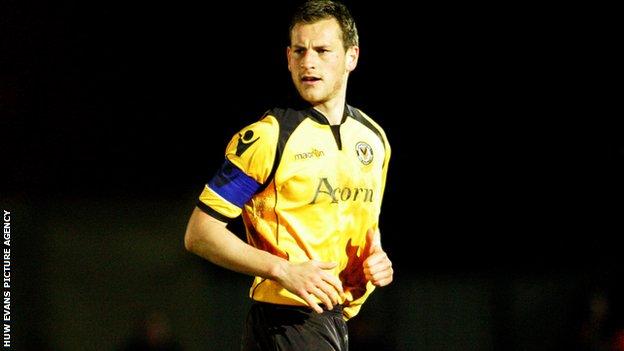 Newport County have confirmed captain Gary Warren will leave the club and is being linked with a move to Scotland.

"It has not been any secret that Gary has harboured ambitions of playing at a higher level," said County chairman Chris Blight.

However, County have held on to midfielders David Pipe and Lee Minshull and signed new goalkeeper Alan Julian.

They have also appointed a full-time general manager in Steve Dance, who joins the club from the Celtic Manor.

Defender Warren, who led County out at Wembley in this season's FA Trophy final, has been linked with a move to a club in Scotland after some eye-catching diplays for the Welsh side.

Blight paid tribute to his former skipper, whose side lost 2-0 to York City at Wembley.

"A player of Gary's ability was always going to gain the attention of League clubs, and that has been happening," said Blight.

"None of us were going to look forward to the day that Gary was going to depart, but a move was always likely.

"If ever there was to be a role model for our up and coming youngsters, then Gary Warren has been just that."

Pipe has agreed to stay with the club for another year and Minshull, who completed a loan spell with County from AFC Wimbledon, has signed for the new season.

Julian has played for Stevenage, Brentford and Gillingham.