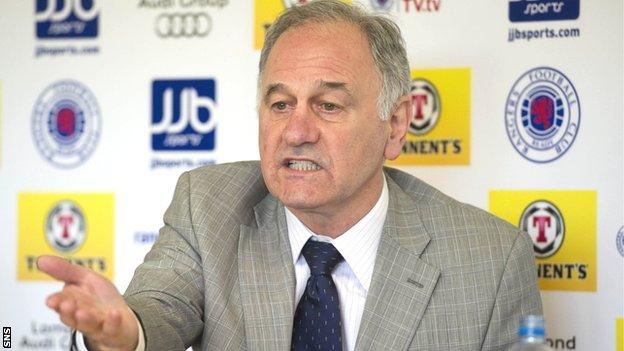 Rangers' prospective owner Charles Green maintains the club's decision to take its case about a year-long transfer ban to the Court of Session was the only route available to it.

He says an appeal to the Court of Arbitration for Sport was not possible, but his claim has been rejected by the Scottish Football Association.

"The club was prohibited from appealing to CAS by the SFA's rules," said Green.

The SFA insists no approach was made by Rangers to discuss appeal options.

At the Court of Session, Lord Glennie referred the case back to the SFA's appeal tribunal.

And the club now awaits that group's decision on how to punish it for bringing the game into disrepute.

Green said in a statement: "Neither I nor my investors wish to see an outcome that would be to the detriment of Scottish football."

He is leading a consortium that is hoping to achieve a Company Voluntary Arrangement to lift Rangers out of administration with an unspecified pence-in-the-pound deal for creditors.

He maintains that Rangers could not keep the challenge to the ruling within the sporting domain because of the wording of the SFA's articles.

Lord Nimmo Smith's inquiry on behalf of the SFA into the takeover of Rangers by Craig Whyte found that he was not a fit and proper person to be involved in Scottish football.

Subsequently, an independent SFA judicial panel imposed fines and a 12-month transfer embargo on Rangers for bringing the game into disrepute in the period that followed Whyte's May 2011 takeover for non-payment of taxes and for not paying money owed to member clubs.

Rangers' appeal against the ban was unsuccessful, with Lord Carloway approving the original decision, but

However, by taking the case to the civil court in Edinburgh, Rangers have breached the SFA's articles of association, which are governed by Fifa.

It could result in the SFA itself being punished by the sport's governing body.

The decision by Lord Glennie means the appeal tribunal has three possible sanctions available to it: suspending Rangers from football, expulsion from the game or ejection from the Scottish Cup.

However, it is not clear whether "ejection" from the Scottish Cup is, in fact, a sanction available to the appeal tribunal, since, technically, the tournament has not started for season 2012/13.

The club has already been fined £100,000 as punishment relating to bringing the game into disrepute, plus £60,000 in other fines.

Green's statement read: "The club, the administrators [Duff & Phelps] and most importantly the supporters have taken the view that any sanction against Rangers - due entirely to the misdeeds of individuals no longer at the club - should be proportionate.

"We and the administrators did not want to take the matter to a civil court at all.

"Unfortunately, the route to apply to the Court of Arbitration in Sport (sic) was not open to the club because the SFA's own articles fail to include a specific provision permitting appeals to CAS and the judicial panel protocol contains a rule which prohibits any form of appeal to CAS or any other body.

"Our position has been endorsed by Lord Glennie in the Court of Session. The club was prohibited from appealing to CAS by the SFA's own rules.

"The judicial review was not an appeal, rather it was the club exercising its right under Scots Law to have the court review whether or not the imposition of the transfer embargo was within the power of the tribunals of the judicial panel.

"All of the appeal points put to the appellate tribunal relating to the harsh and excessive nature of the embargo were dropped as it would not have been appropriate to have taken those to the Court of Session.

"Rangers is wholly committed member of the SFA and SPL and fully respects their structures."

Green goes on to argue that the matter should have been referred back to the original tribunal and not the appellate tribunal.

He believes imposition of the options open to the latter tribunal - suspension or termination of Rangers' membership of the SFA - "would be a disaster for Scottish football and a major setback to our plans to take Rangers forward after a particularly difficult period in its history".

The statement adds: "Equally, the alternative sanction of expulsion from the Scottish Cup is itself a very serious punishment which would also have a severe impact on Scottish football as well as on our club.

"We will be considering with our legal team the best way forward after the public holiday."

In a swift response to Rangers' statement, the SFA issued one of its own on Sunday evening.

It read: "Referring the matter to the Court of Session, Rangers FC utilised the court's right of Supervisory Jurisdiction contained within Scots Law.

"Given that any two parties can seek arbitration, the club was not 'prohibited from appealing to the Court of Arbitration for Sport', as was claimed.

"Indeed, no representation was made by the club to the Scottish FA to discuss the possibility or the process of seeking arbitration via the Court of Arbitration for Sport before Judicial Review was actioned."