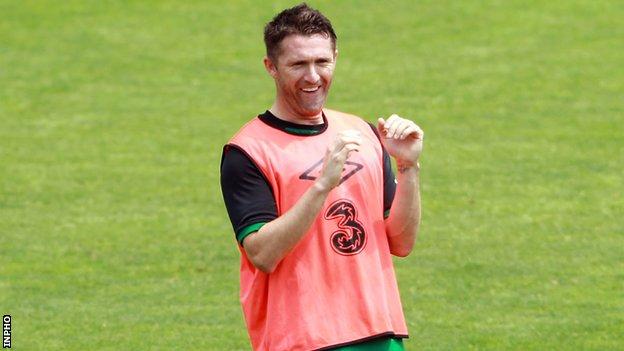 Skipper Robbie Keane believes the harmony within the Republic of Ireland camp will boost their chances of making an impact at Euro 2012.

Despite Kevin Foley's departure from the squad last week, Keane says there will be no Saipan-like controversy for the Irish at these finals.

Ten years ago, Roy Keane quit the Irish squad on the eve of the 2002 World Cup.

"The group of players, how well the players get on with each other has been brilliant," said the Republic skipper.

"It certainly does feel different. There has always been a great team spirit in the Irish camp, but for some reason this has been a little bit different.

"There have been no little niggles, which you usually get in tournaments like this when you are together for a long time.

"Obviously 10 years ago there were a couple, but so far it's been good."

The Republic's preparations have been ongoing for more than a fortnight and will continue on Monday night when they play their final warm-up friendly against Hungary in Budapest.

Giovanni Trapattoni's side go into the game defending an impressive 13-match unbeaten run.

While an extension of that run would provide them with the perfect send-off to Poland, simply getting through the 90 minutes with all 23 squad members intact will be equally important.

Acutely aware of the injury misfortune which has befallen England defender Gary Cahill in recent days, Keane knows exactly what is at stake.

He said: "I know at the back of your mind, you try your best, but as soon as you are on the pitch, it's very difficult.

"If there is a tackle there to be won, it's just normal that you go in and try to win it.

"Of course the last thing anybody wants, and certainly the players and me, is for anybody to get injured.

"To miss a major tournament like this after all the hard work we have done over the last few years, would be terrible for any player.

"I feel for the players, people like Cahill in his first major tournament, who miss out with an injury.

The Republic will leave Hungary on Tuesday morning for their Gdynia base near the Polish city of Gdansk, where they will continue preparations ahead of their opening game against Croatia in Poznan on Sunday.