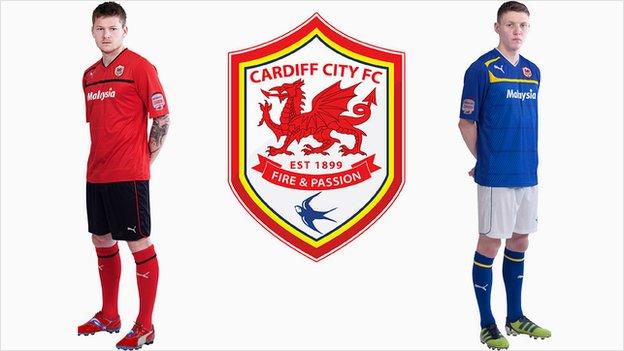 Cardiff City are to go ahead with plans to rebrand the club, including changing the kit from blue to red and introducing a new badge.

The changes are part of a "major and significant" investment pledge from Cardiff's Malaysian owners.

They believe that the change of colour will expand the club's appeal in "international markets".

"We are only too aware that the change of colour is a radical move," said Cardiff chief executive Alan Whiteley.

The decision to implement the rebranding proposal was taken during talks between board members on Tuesday.

Cardiff released a statement confirming that investors Tan Sri Vincent Tan and Dato Chan Tien Ghee have pledged their commitment to the club.

As well as wearing red rather than blue home shirts from next season - for the first time since 1910 - the Championship club say they will now look into expanding Cardiff City Stadium and upgrading the club's training facilities.

More significantly, the investment plan hopes to clear the historical debt to the Langston Corporation, which is represented by former Cardiff owner Sam Hammam.

Negotiations have opened with Hammam and a "fair and reasonable" final offer had been made to the former City chairman in a bid to clear the debts, thought to be around £30m.

"The change of colour is a radical and some would say revolutionary move which will be met with unease and apprehension by a number of supporters, along with being seen as controversial by many," said Whiteley.

"To those I would like to say that this was not a decision that has been taken lightly or without a great deal of thought and debate.

"There is no getting away from the fact that history and traditions are the lifeblood of any club and as such should be jealously guarded and preserved.

"Both the board and our investors fully understand and respect this and will do their utmost to uphold, protect and promote the values and virtues which the club stands for."

Whiteley said the driving forced behind the move was to put Cardiff on a firm financial footing, allowing them to reach the Premier League.

"By securing this investment we can safeguard the immediate and long-term future of this club," he added.

"The changes to the home kit and badge introduced as a consequence of the investment package are designed to help the club to develop its brand and to allow it to expand its appeal to as wide an audience as possible, with a view to delivering local success via an international and diverse market."

Malky Mackay, the Cardiff manager, welcomed the investment and the plans to bolster his squad for the new season.

"The securing of this package of investment and the breadth of vision which it encompasses should enable us to build on the progress already made in my first year and puts us in a position to take Cardiff City forward in the way which the fans deserve," said Mackay.

In May, the owners indicated they would be ready to invest into the club if the and rebrand the club crest.

Some fans initially reacted angrily to the proposed change of club colours and it was feared the protest jeopardised investment plans by principal backer Vincent Tan, who had planned the multi-million pound rebrand.

Cardiff chairman Tien Ghee later revealed that controversial proposal had been but he reassured the ongoing commitment of the Malaysian investors.

He warned that the Bluebirds could not afford to continue losing money - a reported £1m a month - and that their investment strategy, said to be worth £100m, would be reassessed.

Although opposition to the rebrand among some Cardiff fans has cooled because of the scale of the proposed investment, others remain vehemently opposed to the change.

Cardiff Supporters' Trust chairman Tim Hartley said: "We welcome news about the proposed investment, stabilisation of the club's finances and especially the commitment to clearing our historic debts.

"However, there are still questions that need to be answered such as what happens to the proposed investment if there is no deal over historical debts with Langston and how much will actually be invested and over what period."

Cardiff's owners have already invested about £40m since Tien Ghee first represented the Malaysian investors on the Cardiff board in November 2009.