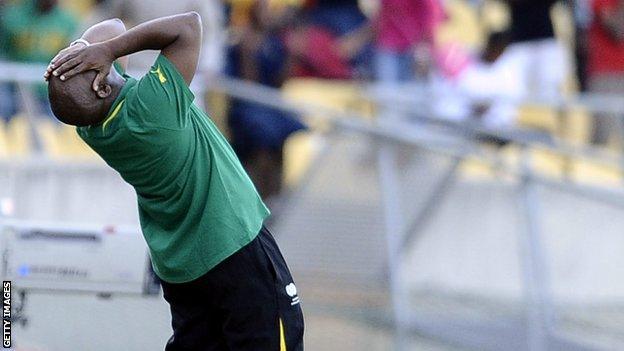 The South Africa Football Association and coach Pitso Mosimane have agreed to part company following a lengthy meeting on Monday.

The move comes after South Africa's disappointing 1-1 draw with Ethiopia in 2014 World Cup qualifying on Sunday.

Steve Komphela, one of the assistant coaches, will take charge for Saturday's World Cup qualifier in Botswana in Gabarone.

Safa said the decision is "in the best interests of the national team."

The country's football chiefs were clearly unhappy with the team's performance on Sunday and also their failure to win any of their last seven official matches.

Despite the poor record the Safa president, Kirsten Nematandani, paid tribute to Mosimane.

"The association will be indebted to Mr Mosimane for the work he has done for Safa since his appointment as head coach of Bafana Bafana and we wish him well in his future endeavours," he said.

"This association wants to place on record that Mr Mosimane is the only coach that has assisted Safa by donating a portion of his salary in the pursuit of the development agenda of the association.

"That included assisting the ex-professional football players to attend the coaching course that is currently on-going at Safa House."

The CEO of Safa, Dr Robin Petersen, urged Bafana fans to back their team as they prepare to face Botswana.

"We appeal to the nation to also support the caretaker coach, the technical team, the players and the whole team going forward," he pleaded.

"We have entered into a crucial period of World Cup qualification and we will need all hands on deck to ensure this country gets to Brazil in 2014, as well as perform admirably at the 2013 Africa Cup of Nations that we will host."

The 44-year-old Komphela captained Bafana in 18 of his 24 appearances between 1992 and 1995 and had a successful spell as a defender with Turkish side Gaziantepspor in the mid-90s.

After the home draw against Ethiopia and Botswana's 2-0 defeat against the Central African Republic, this weekend's encounter in Gaborone has become vital for both sides in their quest to top the group and proceed to the final stage of qualification for the 2014 World Cup.