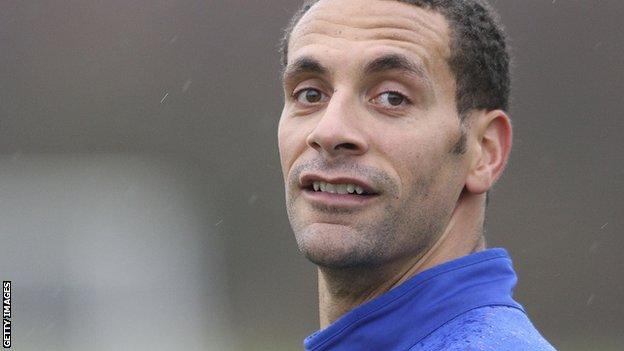 Dutch midfielder Rafael van der Vaart says Rio Ferdinand is one of England's best defenders and is surprised by his omission from the Euro 2012 squad.

And Tottenham's Van der Vaart told BBC Sport: "It's strange. I think he's still one of the best defenders in England and maybe in the world.

"He's fit and fresh and he plays for Manchester United so I'm surprised."

Ferdinand, who has 81 caps for England, was left out of the original squad before being overlooked again when Gary Cahill was ruled out of the tournament through injury on Sunday.

Liverpool defender Martin Kelly, 22, was preferred to Ferdinand, who last played for his country in June 2011 but made 38 appearances for Manchester United in the 2011-12 season.

Hodgson has said Ferdinand was left out for "footballing reasons" and not because England defender John Terry is due to stand trial in July over a charge he racially abused Ferdinand's brother Anton. Terry denies the charge.

"I think [Rio] was a big surprise... but they have a good team," said the Inter Milan midfielder, who is with the Dutch squad in Krakow, the Polish city which is also a base for England and the Italians.

"We played against them at Wembley and they missed some players there. But they have a good team. They are as strong as ever."

Van der Ver Vaart, who believes the Dutch will reach the quarter-finals at Euro 2012 despite playing in a group alongside Germany, Portugal and Denmark, also believes England can thrive despite Ferdinand's absence.

"They still have a great team. It's a pity for them that [Frank] Lampard is injured, but they have so many good players. They have a new manager, so maybe they'll play a little bit different now. England are always a danger to play against," he added.

Hodgson's decision to leave out Ferdinand has been supported by former Spurs manager David Pleat and ex-England winger John Barnes, with Pleat calling the centre-half's representative Jamie Moralee "out of order" for his comments.

"Nobody has a divine right to play in the side, I think some of the headlines are very dramatic," he said.

However, Reading striker Jason Roberts said he was concerned about Ferdinand's exclusion.

"I'm sure he [Hodgson] has his reasons and he's got to pick the team that he feels will do well in the championship," Roberts told BBC Radio 5 live.

"It's a very strange situation, and I think a lot of people are finding it unnerving a player of that ability is not making the squad.

"He's certainly as good as anybody there, if not better. There is no doubt that Rio would fit in there quite easily. If there are other issues around that situation, then we need to be a little bit more honest about it."