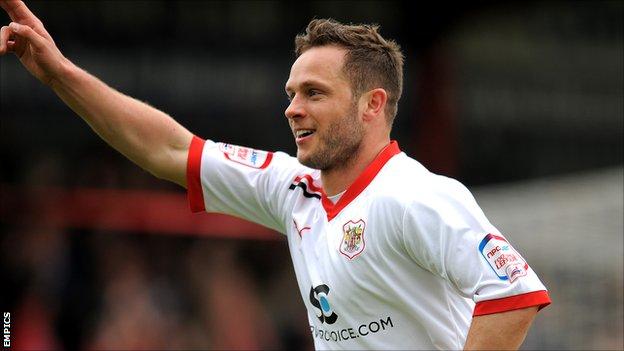 Stevenage have confirmed that striker Chris Beardsley has left the club after failing to agree a new contract.

Signed on a free transfer from Kettering in 2009, the 28-year-old scored 18 goals in 108 games during his three-year spell at Broadhall Way.

Ten of those goals came last season, as Gary Smith's side reached the play-offs in their first season in League One.

But he played only 27 minutes of the semi-final tie with Sheffield United, which they lost 1-0 on aggregate.

Although disappointed with Beardsley's decision to leave, Stevenage chairman Phil Wallace told the club website that progress is being made in strengthening the squad for next season.

"Chris told us that it was time to be going elsewhere," he said. "He's been a great servant and we wish him well for the future.

"Our focus is not on selling players. It's on strengthening our side and finishing the job we started last year.

"We spent months identifying lads that we want to bring in and that is gradually taking shape behind the scenes."