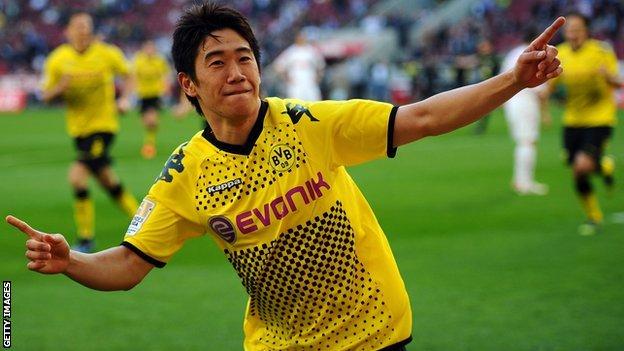 The press officer at Signal Iduna Park can breathe a little easier - he won't have to find space in the press box for the dozen Japanese reporters who have been following the fortunes of Shinji Kagawa anymore.

The 23-year-old attacking midfielder has become a major star back at home since his £300,000 move to Borussia Dortmund from second division Cerezo Osaka in August 2010.

And now Manchester United have agreed terms to sign Kagawa, subject to the granting of a work permit later in June.

It is easy to see why his native media make such a fuss. Kagawa has established himself as arguably the best Japanese player in Europe over the course of a sensational season in the Bundesliga, where he ended up helping Dortmund to an unprecedented double.

2009: Becomes highest scorer in J-League Division 2 as Osaka are promoted to top flight

2012: Wins league and cup double with the German side. Agrees move to Manchester United

Watching from the stands in Berlin's Olympic stadium, Sir Alex Ferguson could hardly disguise his excitement on viewing the player in action during the 5-2 destruction of Bayern Munich in the DFB Cup final in May.

Kagawa scored the opener and was involved in every Dortmund attack that evening.

After an impressive first season in Germany that came to an abrupt halt when he broke a metatarsal on duty with Japan in the Asian Cup in January 2011, Kagawa was so good in 2011-12 that the enforced four-month absence of Mario Götze, the biggest prodigy in Germany football, hardly registered.

The numbers alone bear witness to his enormous impact. Kagawa netted 17 in all competitions and set up 13 goals to become the league's most efficient and best attacking midfielder, ahead of Bayern's Arjen Robben and Franck Ribéry.

"He's simply a great footballer," said team-mate Mats Hummels. "His movement is insane. I wouldn't like to play against him."

Dortmund were resigned to losing Kagawa when the player told them he wouldn't renew his contract beyond 2013, to follow his dream to play in England instead.

His game certainly appears tailor-made for the Premier League - he's an incessant runner who takes up intelligent positions between defensive lines, often drifts wide out left and he attacks the box with explosive bursts of pace.

Despite his slender frame, he's strong enough to hold off defenders and can keep the ball in tight spots. His finishing has become one of his strongest assets, along with his ability to play in team-mates with direct, one-touch passes, but he's very much a man for the final third, a player who finds space between the lines and gets on the end of things.

Despite some reports, he is not a Japanese version of Tottenham's Luka Modric because pulling the strings in the centre of the pitch is not his game.

His ideal position is behind the main striker but, for the national team, he mostly plays wide left in a 4-2-3-1 formation to accommodate Keisuke Honda (CSKA Moscow). His incredible work-rate and defensive discipline would make it possible for him to play on the left in a 4-4-2 as well, but his talents would probably come out more in the fluidity of a 4-2-3-1 system.

At Dortmund, he was perfect for the highly aggressive "Gegenpressing" tactic employed by manager Jürgen Klopp - the Black and Yellow instantly pressed the ball after conceding possession in the opposition half.

There's no doubt that Kagawa will be a very useful addition to United's squad and, based on last season's showing, he will be starter, too.

After settling quickly at Dortmund, there's nothing to suggest that the genial and much-liked player will need more time to acclimatise in Manchester.

"He's a great guy," Klopp once said, "and as bonus, he can also play pretty well."

If you consider the enormous overseas marketing potential that comes with being United's first Japanese player, the transfer was almost a no-brainer.

The only problem now might be finding room in the Old Trafford press box for the army of Japanese reporters who will start to keep tabs on his progress.