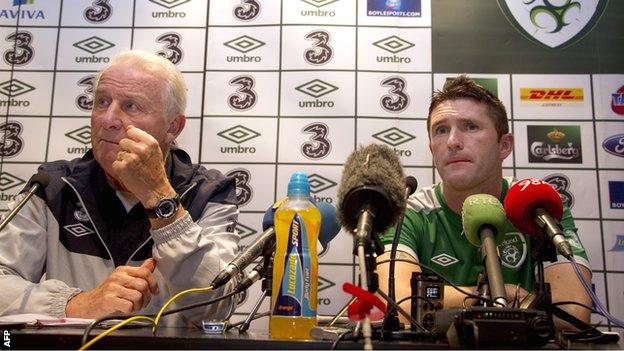 The Republic start against Croatia on Sunday before facing holders and world champions Spain, and Italy.

Keane said: "He knows exactly what he has to do. He's been in the game a long time and won nearly every trophy.

"Players know exactly what we have to do on the pitch. We have the toughest group, but we're better as underdogs."

Keane, the Republic's leading goalscorer, played alongside three of the Croatia squad, Luka Modric, Niko Kranjcar and Vedran Corluka, during his time at Tottenham.

He said of playmaker Modric: "He's a fantastic player - he makes them tick. It's the same with Tottenham. Every time he's on the ball he makes things happen, he makes the players around him better when he's on form."

Now 32 and playing for LA Galaxy in the United States' MLS, Keane is one of eight players in the Republic squad aged over 30.

"By no means are we thinking it is going to be easy. It is going to be tough, but this could be probably the last chance for many players, so we have to grasp that with both hands," he said.

The veteran striker says the team were galvanised by the hugely controversial World Cup qualifying match in Paris in November 2009 when a Thierry Henry handball led to the goal that eliminated the Irish.

"The players realised how close we were to a major tournament, and so to have that taken away from you, in the incident that we obviously all know about, it is hard to take," Keane said.

"We could have easily crumbled the next campaign, but we stuck together, we worked hard and we certainly became a better side for it."

Asked about his working relationship with his national coach, he said: "The two of us can be quite fiery sometimes. I am usually quite laid back, but if something needs to be said, I will say it straight away. And I think the manager is very similar in that respect."

Keane also believes the team has another advantage over rival nations - the backing they will receive from their vociferous fans.

"If you ask any supporter outside of Ireland, they always want the Irish supporters there, because they are always in good spirit, and they always have good fun," he added.

"That's very important for the players. The players always talk about the fans, and they're not just saying that lightly, they genuinely mean that. They've been fantastic over the years."