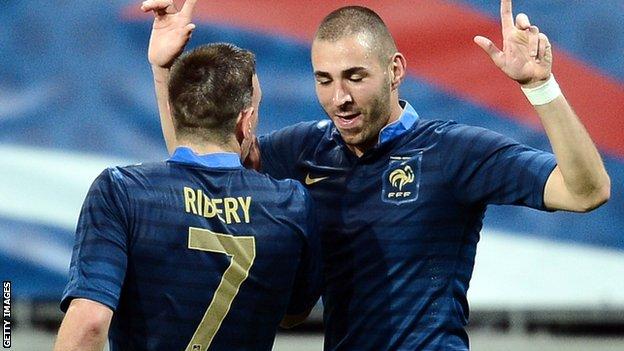 France warmed up for their opening Euro 2012 match against England with a resounding 4-0 victory over Estonia.

Bayern Munich winger Franck Ribery opened the scoring after a neat flick-on from Karim Benzema before the latter doubled the lead.

The Real Madrid striker then got his second, before substitute Jeremy Menez netted in injury time.

France, who face England in Donetsk on 11 June, arrived at the MM Arena in Le Mans unbeaten in their last 21 games.

Coach Laurent Blanc had some fitness concerns, with Yann M'Vila ruled out by an ankle injury while a thigh problem sidelined Blaise Matuidi.

But they extended their winning run with ease against a team ranked 54th in the world.

Ribery and Benzema ran rings around the Estonia defence and looked threatening every time they linked up and pushed forward.

However, Roy Hodgson's men will take comfort from Les Bleus' questionable defence which would have been breached by a stronger outfit.

That said, France - who fly to Ukraine on Wednesday - have now won 15 of their last 21 games, including victories over Brazil, Germany and England.

Euro 2012 co-hosts Ukraine looked out sorts as they went down to Turkey in Ingolstadt, Germany.

It was a disappointing performance from Ukraine, who had won five of their last six matches, including a thumping 4-0 win over Estonia last time out.

Goals from Caner Erkin and Mustafa Pektemek confirmed the victory as Turkey dominated the game. Ukraine did press on in the dying stages with Andriy Shevchenko hitting the bar - but they could not break through.

Sweden, who play Ukraine in their Euro 2012 opener, will head to Kiev on the back of a hard-fought victory over Serbia at the Rasunda Stadium in Stockholm.

PSV striker Ola Toivonen headed the hosts in front before Neven Subotic levelled the score before the break.

But AC Milan forward Zlatan Ibrahimovic scored the winner from the penalty spot after Toivonen was fouled by Damir Kahriman.