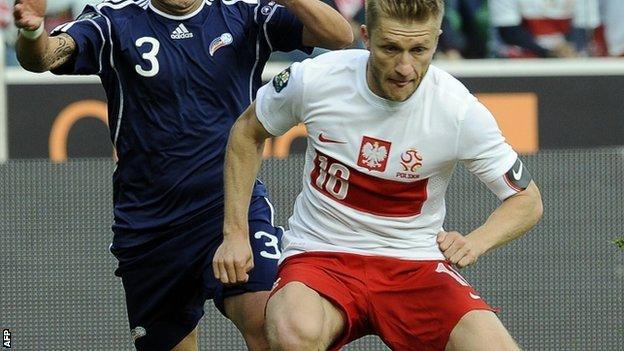 Captain Kuba Blaszczykowski says it "is a dream come true" for the Poland team to open Euro 2012 on home soil.

Friday's fixture between the co-hosts and the 2004 champions kicks off the 16-team three-week tournament.

"The whole country has great expectations and we are aware of it but it will only motivate us to win," the 26-year-old winger said.

"This is a dream come true, the only thing we can do is realise those dreams and make them last."

Manager Franciszek Smuda, who took charge of Poland in October 2009 after they failed to qualify for the World Cup, added: "The atmosphere is really becoming better and better.

"We can see that when we go to training sessions, we can see the support on the streets, people cheering and waving - it's great. I hope it will continue until the very end of the tournament."

Amid all the excitement, Poland must focus on their opening Euro 2012 match against Greece and keep the hyped clash against arch-rivals Russia at the back of their minds.

Poland and Russia have had a long and frequently turbulent relationship and there have been reports that Russia fans plan to march through Warsaw prior to the clash on 12 June.

"The first step is always the most important step, and the first step is the Greece match," added Blaszczykowski, who helped Borussia Dortmund to the league and cup double last season.

"Before the Greece match, we can't be thinking about Russia, and so on."

Opponents Greece did not lose a game during qualifying but are 100-1 with some bookmakers to win the tournament.

Captain Giorgos Karagounis told his team-mates they must concentrate fully on every group game to stand a chance of reaching the knockout phase.

"In such a tournament every game is a final, let alone when we speak for the opening match of the group and the whole tournament," the 35-year-old Panathinaikos playmaker said.

"It's a proper final. Since there are so few games that we will play, no mistakes are allowed."