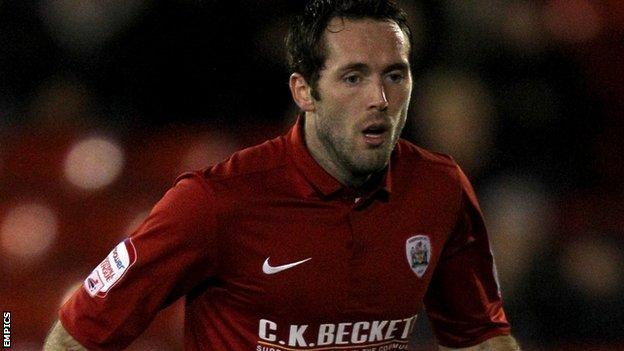 The 24-year-old, who started his career at Celtic, made 32 appearances last season as the Tykes finished 21st in the Championship.

"His agent has intimated that Jim has accepted our offer and he should be putting pen to paper in the next week," Rowing told BBC Radio Sheffield.

"He's been an integral part of our team for the last two years."

He added: "Hopefully the fans will see that we've done all we can to retain his services and I can't wait to get the paperwork done now."

O'Brien joined the Tykes from Scottish Premier League side Motherwell in 2010 and has played 64 times in the league in two seasons at Oakwell.

Meanwhile, Rowing admitted that the club were frustrated by the situation surrounding out-of-contract skipper Jacob Butterfield.

Manager Keith Hill reiterated last week that he hoped the midfielder would stay and Rowing is keen for the situation to be resolved as soon as possible.

"I'm very disappointed because we've had no communication from his agent or the player himself as to what the future holds," he continued.

"We've gone by the book and made our offer and we're in the dark at the moment.

"Jacob has until around 19 June to make a decision and he has to come back at some point to let us know if he wants to stay with us or move on.

"If no one has been in touch with him then he may well seek to stay here."