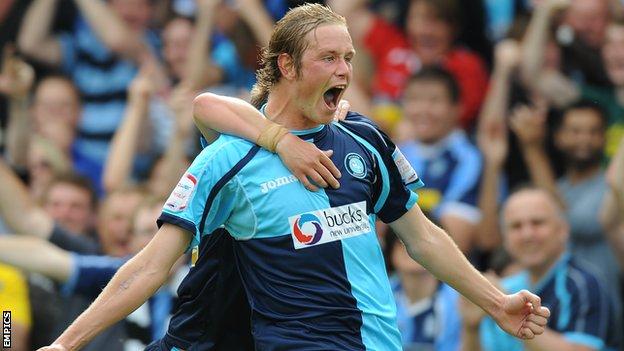 Wycombe Wanderers striker Scott Rendell is hoping his lack of action at Adams Park last season was just a "blip".

The 25-year-old started just two league games for the Chairboys, before joining Bristol Rovers and Oxford on loan.

"An important aspect of football is to be happy where you are and playing games," the former Cambridge United forward told BBC Sport.

"I thought I'd found that in my first year at Wycombe. Maybe last year was a little blip, we'll soon see this year."

He added: "We've lost a few players who are out of contract so maybe I'll get my chance again this year."

Rendell made an instant impact at Wycombe when he joined from Peterborough two years ago, scoring 19 goals in the Chairboys' 2010-11 promotion campaign.

But limited opportunities saw him loaned out to the U's this season, where he scored three times in 15 League Two starts.

He will be back at that level again next season following Wycombe's relegation.

"It was good to get some games last year. The first six months weren't planned at all," he said.

"Especially after the year before when I was top scorer and we got promoted. But it wasn't to be.

"I think I had played two games so I made the decision at Christmas to go out on loan. Oxford is a fantastic club. I was lucky to go and play there.