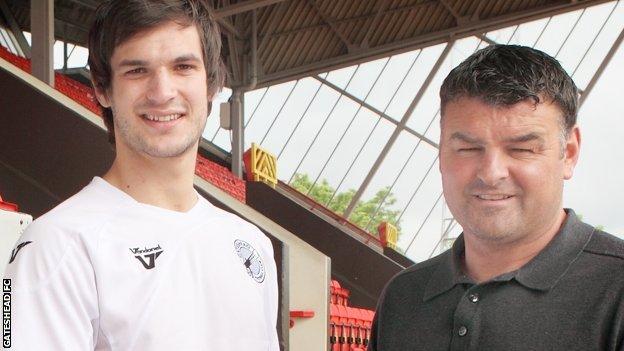 Gateshead have signed striker James Brown following his release by Hartlepool at the end of last season.

The 25-year-old, who made 175 appearances for Pools despite being dogged by serious knee injuries, has signed a one-year deal.

"I'm delighted, the summer holiday is booked and it's nice to be sorted before it," Brown told BBC Newcastle.

"It was the move I was after from the start so it's good to be sorted. They're a proper footballing side."

Brown's exit from Victoria Park ends an eight-year association with the club he first joined as a teenager.

"It's going to be strange, it's all I've known," the Cramlington-born forward said.

The recent departure of 35-goal Jon Shaw from Gateshead has put pressure on players like Brown, Yemi Odubade, Nathan Fisher and Liam Hatch to replace him.

"I will be looking to get into double figures, that's what I expect from myself," Brown added.

"To lose Jon Shaw is a big blow for the club but hopefully I can chip in for a few if his goals."