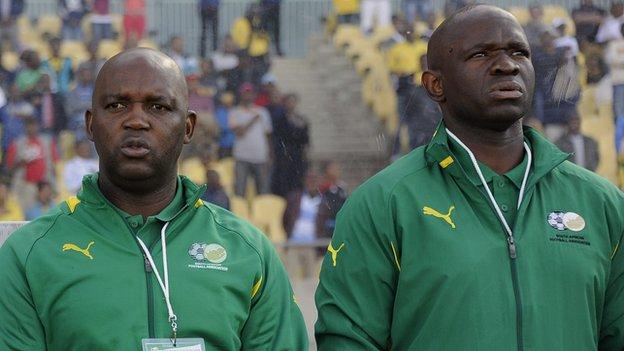 South Africa forward Thulani Serero says he has been shocked by the departure of coach Pitso Mosimane.

Mosimane, 47, left his post after talks with the South African FA on Monday, one day after the disappointing 2014 World Cup qualifying draw at home to Ethiopia.

"It's a real surprise to see him go," Serero told BBC Sport.

"Everyone was really shocked by what happened but now we have two more matches to concentrate on."

"He is a very good coach and I believed in him but that is football sometimes."

Mosimane's assistant Steve Komphela has been placed in temporary charge for Saturday's meeting with Botswana in Gaborone and next week's friendly against Gabon.

Meanwhile, Moroka Swallows' Gordon Igesund and SuperSport United boss Gavin Hunt are the early front-runners to take the role on a permanent basis.

Serero missed the match against Ethiopia in Rustenburg after attending his father's funeral on Saturday.

He returned to the South African training camp the following day and is hoping to be selected for the crucial showdown with neighbours Botswana.

This is despite the fact that injury problems have prevented him featuring for Ajax Amsterdam since the end of March.

Serero, 22, has backed the appointment of former Bafana Bafana captain Komphela and acknowledges the side will be under severe pressure to get three points against Botswana.

"I've worked with him before and he is already part of the coaching set-up so that should help," he said.

"But everybody knows that we have to win our next game to stand a chance of finishing top of the group.

"We know it will be very tough because away games in Africa are always difficult - whoever you play. We will need to be at our best to beat them."

Serero added: "Hopefully I can be involved against Botswana and Gabon because it will be very good for me to get some game-time."

Mosimane, who took charge after the 2010 World Cup, left his post after seven matches without a win, a run that include the failure to qualify for the 2012 Africa Cup of Nations.