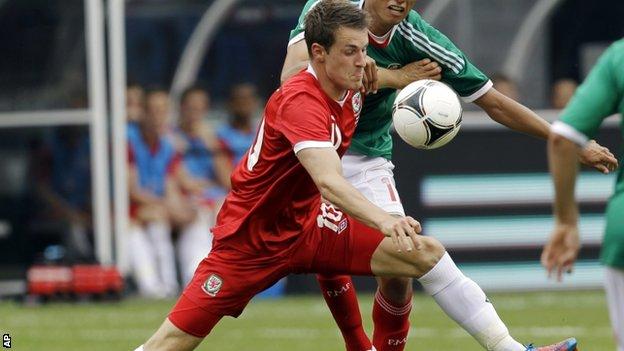 Wales have reached their highest position in the Fifa world rankings for almost 17 years.

Despite losing their last match 0-2 to Mexico, Wales have moved up three places to 38th place in the latest table.

That gives them their highest position since reaching 34th place in September 1995.

Spain remain top ranked side in the world, while Uruguay are in second place and Germany are in third.

The Netherlands stay at fourth, while Brazil move to fifth and England move up one place to sixth.

The Republic of Ireland stay in 18th, with Scotland moving up seven places to 48th and Northern Ireland falling three places to 103rd.

New manager Chris Coleman saw his Wales side lose to Mexico in his first game in charge when they met in New Jersey on 27 May.

Coleman, who was appointed in January, took a back seat for the Gary Speed Memorial Match in February when Wales lost 1-0 to Costa Rica.

Wales, under the late Gary Speed, made the biggest yearly leap in Fifa rankings during 2011 amassing 330 points.

Speed's Wales had won four of his last five games in charge of the national side.

Wales' next match is a friendly at home to Bosnia-Hercegovina on 15 August. Coleman's side will then face Belgium in Cardiff in their opening match in the 2014 World Cup qualifiers.