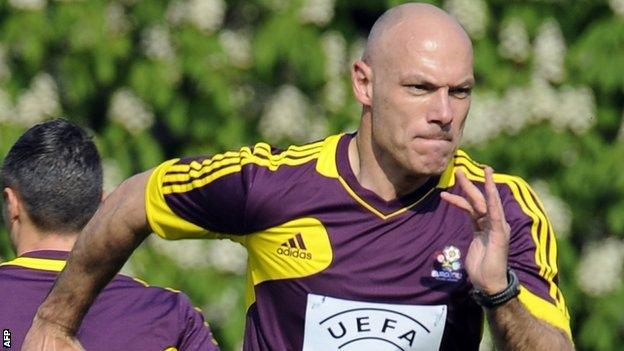 Englishman Howard Webb has been chosen to referee Russia against the Czech Republic on the first day of Euro 2012.

The 40-year-old from Rotherham, who took charge of the 2010 World Cup final, will be aided by assistants Michael Mullarkey, Peter Kirkup, Martin Atkinson and Mark Clattenburg.

The Group A clash is the second match of the tournament following the opener between Poland and Greece.

Webb was also selected as England's referee representative at Euro 2008.

During that tournament, the Yorkshireman was criticised by the Poland manager at the time, Leo Beenhakker, after he awarded Austria a penalty in stoppage time which they scored to draw 1-1.

Twelve referees have been appointed to handle the 31 matches at Euro 2012.