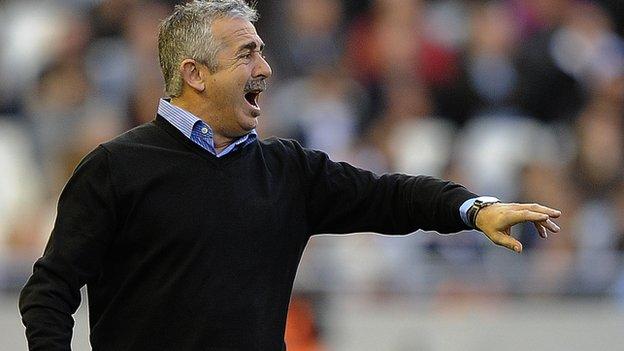 His death comes just 24 hours after he agreed a deal with relegated Villarreal to take over for the 2012-13 season.

Preciado was sacked by Sporting Gijon in January after twice earning them promotion into Spain's top flight.

As a player Preciado was a defender who began his career at Racing Santander and also appeared for Linares, Mallorca, Alaves, Ourense and Gimnastica.

After retiring in 1992, he began coaching with Gimnastica in the mid-1990s and also had spells in charge of Racing B, Racing Santander, Levante and Murcia before joining Sporting Gijon in 2006.

He led them into the Spanish top division in his second season and spent six years with the club.

Real Madrid manager Jose Mourinho wrote an open letter on his club's website, saying: "Manolo (Manuel's nickname) was always an honourable opponent, who I got to know well when he came to visit us in March.

"He had everything that I like in a person and in sportsmen: character, openness and the courage to fight against blows.

"We have been left by a football figure and above all by a very special person. My memory of him will be heartfelt and permanent."

Barcelona's Cesc Fabregas said on Twitter: "I can't believe the bad news I just woke up with. Hugs for the family of Manolo Preciado. RIP my friend." Another Barcelona player, Gerard Pique, called Preciado "one of the greats of the sport."

A Villarreal club statement said: "Villarreal want to express their deepest sorrow at the sad loss and want to offer their condolences to his family and all his relatives."

Preciado's record of 232 official matches in charge at Sporting, who were also relegated last season, is second only to Jose Manuel Diaz Novoa, who presided over 282 games.

A statement on the Sporting website read: "With deepest regret, Sporting Gijon wish to express their sorrow at this sad loss, for someone who formed an integral part of this club's history, and send their deepest condolences to his family in this time of grief."