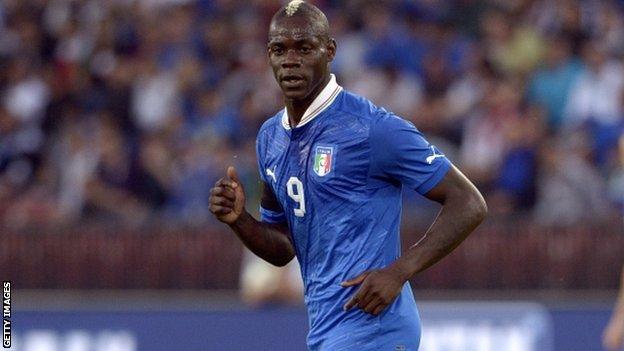 Referees at Euro 2012 are capable of handling cases of racist abuse towards players, according to Premier League referees' chief Mike Riley.

Uefa President Michel Platini said players who left the pitch after being abused would be booked, with officials deciding if a game had to be stopped.

But Riley stressed the systems in place meant those scenarios are unlikely.

"You hope the call to abandon the match never has to be taken because people modify their behaviour," he said.

"Uefa has had this protocol in place for a number of years. It's designed to allow referees to identify the problem, and work with the match director, to then take action against spectators and remind them of their responsibilities."

Manchester City's Italian striker Mario Balotelli said he would walk off the field if he heard any racist abuse during the European Championship in Poland and Ukraine.

His claim comes after a BBC Panorama documentary showed incidents of racist chanting at club grounds in the two countries hosting the tournament.

Piara Powar, who was at the news conference where Platini made the comments, said he had been assured by clarifications by former referee and Euro 2012 Respect ambassador Pierluigi Collina.

Powar, the executive director of Football Against Racism in Europe (FARE), told BBC Sport: "Collina was clear that if a player did approach a referee and was looking for help, that the referee would then facilitate the player leaving the field of play.

"There would be no question of yellow or red cards being issued.

"From our reading of the situation, if things are so bad that a player feels uncomfortable and wants to leave the field, the referee would have stopped the game by then. So the circumstances we are talking about almost certainly wouldn't arise."

Powar also said he was happy with the "theoretical" process set out to combat racist abuse during Euro 2012.

But he did say Uefa should administer harsher penalties against national teams whose fans are found guilty of racially abusing players.

English referee Howard Webb will be one of 12 referees at Euro 2012, and Riley backed him and others to handle any situation that might arise.

"If you look at the people selected for the tournament, they are probably the 12 best referees in Europe," Riley, general manager of the Professional Game Match Officials, told BBC Sport.

"Take Howard Webb as England's representative there, who is probably the most widely respected referee in world football.

"These are people who have the courage to take difficult decisions and throughout their career have been faced with a number of situations that you might term unusual, and they have proved time and time again they are capable of dealing with them."

Riley, who was a referee at Euro 2004 and officiated in the Premier League for 13 years, urged players to approach officials in the first instance should abuse occur.

"If the players become aware of any abuse, the first thing to do is to alert the referee to it because the referee can instigate the protocol," Riley said.

"He can work with the match director to alert the police, who can then target CCTV into the right areas, they can work with spectators in those areas to eradicate the chanting."

Riley added: "I take you back to an example in a game that I did a number of years ago where a particular player from the away team was subject to some racist chanting so we stopped the game.

"You approach the player, let them know you're aware of the situation and try to do things that will make the player feel more comfortable to stay on the field of play."