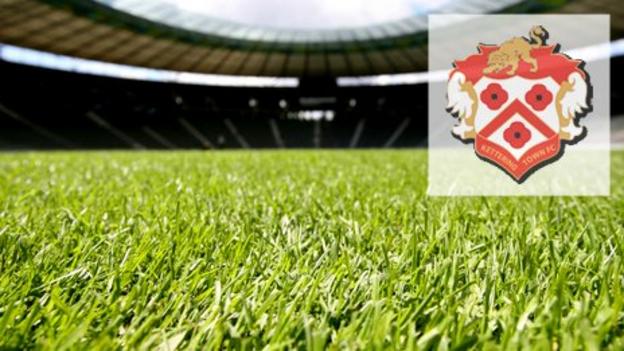 The details are included in the club's proposal to enter into a Company Voluntary Arrangement (CVA).

The creditors' meeting is scheduled to take place on 15 June.

And acting chairman George Rolls said that if the CVA is approved, a "new beginning" will follow "the sorry chapter of the last 18 months".

The proposal states that the planned takeover of the club will only go ahead if the CVA is approved.

Several former members of staff and 11 players are among the creditors, with four of them owed more than £7,000, most of which they are unlikely to be paid under the CVA proposal.

"When I came in and addressed the players [in February], what I said was that if the business hadn't applied for an insolvency act or administration by the 1st of June, we would be paying their back-dated pay," Rolls told BBC Radio Northampton.

"If we did [apply for a CVA], though, they would only be entitled to £800 from the government, plus whatever there would be from a CVA - or nothing if the club was liquidated."

Some people will suffer financially, and I apologise for that, but those who [continue to] work for us, hopefully they will get money back over time with new business

Last summer, Kettering quit Rockingham Road, their home since 1897, to take up tenure of Nene Park, the former ground of Rushden & Diamonds, in nearby Irthlingborough.

As a result, they owe East Northants District Council more than £28,500 and Kettering Borough Council over £2,000, the latter for 'empty premises' rates.

Other creditors include the Child Support Agency, St John's Ambulance and Northants Police, as well as football clubs Blackpool and Crystal Palace.

The largest sums are owed to current owner Imraan Ladak, shareholder Ray Khan and Rolls, but the proposal states that "the current directors will waive the right to repayment of their loans under the arrangement".

Khan is set to remain with the club after the takeover, but the CVA will only be approved if creditors holding cumulatively over 75% of the debt allow it.

"Of course all the creditors have been let down, but this is a solution," said Rolls.

"Some people will suffer financially, and I apologise for that, but for those who [continue to] work for us, hopefully they will get money back over time with new business from the football club.

"If the CVA isn't approved, the club will go into liquidation and the creditors will get nothing.

"Over the last three years, I've lost over £600,00 with companies going insolvent. I know how the creditors all feel."

The proposal states the club will switch to part-time football next season, "with the consequent saving in players and back room staff wages," although Rolls maintains that their intention remains to stay a full-time club.

Kettering have been provisionally placed in the Evo-Stik Southern Premier following relegation from the Blue Square Bet Premier.

Despite that, Rolls insisted approval of the CVA will lead to a brighter future for the club, saying: "The debts were historical debts and, since I've been at the club, we've managed to bring those debts down.

"The sorry chapter of the last 18 months will come to an end next Friday and then it's a new beginning. Kettering Town will prosper again and it won't be long before the Poppies are back in the Conference."

But he added: "We do need the supporters to rally round. We've sold one season ticket in the last six weeks."