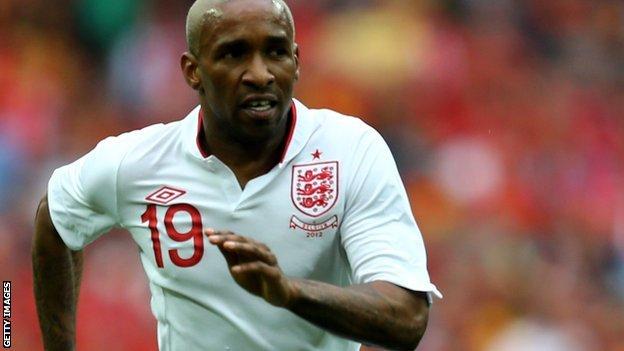 Jermain Defoe rejoined the England squad in Krakow on Saturday morning and will be available for Monday's opening Group D match against France.

The Tottenham striker returned home from the team's training base following the death of his father on Wednesday.

Defoe will be named on the bench against France in Donetsk, with Danny Welbeck likely to start in attack.

"I want to thank the fans, my family, friends, the England boys, the FA and manager for their support," Defoe said.

"I can't tell you how much it means to me. I love you all, may God bless you. A special thank you to Royal Marsden's doctors & nurses who looked after my dad. Very special people."

"Very sad news about Jermain Defoe. The football context is purely secondary in such circumstances, but Defoe was not going to start against France - his role out here is primarily as an impact substitute who is always capable of scoring a goal."

Defoe arrived at the team hotel early on Saturday and left with the squad for a closed-doors training session some 30 minutes later.

England fly to as Donetsk on Sunday to complete their final preparations for the match against France. Wayne Rooney is banned for the first two games.

Defoe appeared as a late substitute in England's final warm-up match, hitting the post in a 1-0 victory over Belgium at Wembley on Saturday.

He made his 47th England appearance last weekend, a record 30 of which have been as a substitute, and he has scored 15 goals for his country.

He also spent much of last season on the bench at Spurs, with 17 of his 38 appearances as a substitute, but scored 17 goals.

Following news of his return home, a Spurs statement read: "Everyone at the club sends their sincere condolences to Jermain and his family."