Spain waltzed past a feeble France side in Donetsk to set up a Euro 2012 semi-final meeting with Portugal.

Xabi Alonso, on his 100th appearance for his country, headed in a Jordi Alba cross after 20 minutes.

France struggled to make a mark and only conjured a rare threat when right-back Mathieu Debuchy headed a Franck Ribery cross over.

Spain comfortably saw out a one-sided game and sealed the win with a 91st-minute Alonso penalty.

"You've got to say Spain look after the ball very, very well. They always do enough, they are the best team football-wise in the world. France can take a lot from this tournament. They've done OK."

Much had been expected of a game between two of Europe's heavyweights, but it proved a mismatch as Spain easily dispatched a France side lacking intensity and invention.

Victory gave Spain their first win over France in a competitive game and kept them on course for a third successive tournament triumph to follow Euro 2008 and the 2010 World Cup.

Les Bleus had looked distinctly unconvincing in their final group match against Sweden in a defeat that had but this was supposed to be a new chapter. Instead, it was the same old story as they fielded a defensive line-up and conceded ground and possession to their opponents.

For their part, Spain had chosen not to play a recognised striker, replacing forward Fernando Torres with midfielder Cesc Fabregas, who had a strong early claim for a penalty. 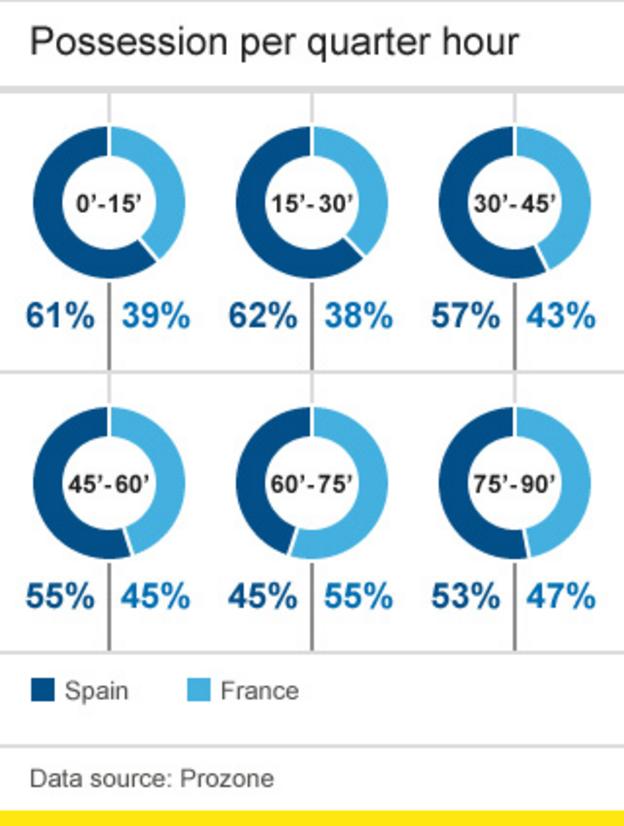 The Barcelona man, running on to a lofted Alonso pass, looked set to run through on goal before he was brought down by a clumsy Gael Clichy challenge but referee Nicola Rizzoli waved away the appeals.

Spain, though, quickly went up a gear, Iniesta guiding a pass wide to overlapping left-back Jordi Alba who left Debuchy trailing before crossing to the far post where Alonso headed back across the keeper and into the net.

The forward forays of Alba and right-back Alvaro Arbeloa were causing France problems, while Andres Iniesta and Xavi's pressing and probing did likewise from the the centre of midfield.

For the French, midfielder Yohan Cabaye had a well struck free-kick tipped over by Iker Casillas but a side clearly set up to catch Spain on the counter-attack mustered precious few opportunities to do so.

Laurent Blanc's men improved marginally in the second half and Debuchy headed over a rare chance, but Spain's ability to hold possession with their metronomic passing style repeatedly drew the sting from France's attacks.

France did not look like they had either the belief or ability to equalise, a malaise epitomised by disappointing striker Karim Benzema, whose Euro 2012 campaign ended without his managing a goal.

As the game went into injury time, Anthony Reveillere brought down Spain substitute Pedro to concede a penalty that Alonso drove in to complete France's miserable evening.