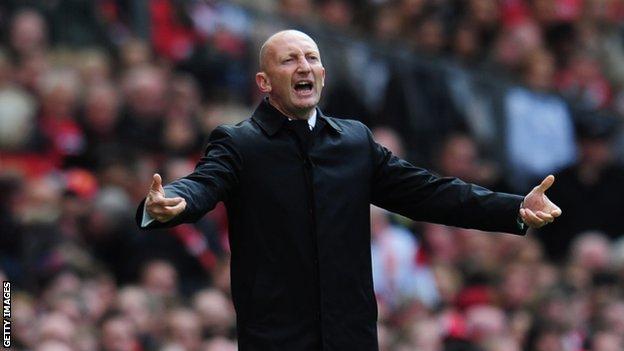 Blackpool have revealed they have had no official approach for manager Ian Holloway from Swansea City.

Holloway is one of the managers to have been linked with the vacancy at the Liberty Stadium following Brendan Rodgers's move to Liverpool.

But chairman Karl Oyston said he is amazed that neither Swansea, nor any other club, have wanted Holloway.

"I would think he would make a prime candidate for other clubs to consider," said Oyston.

Two years earlier, he had taken the Tangerines into the Premier League through the play-offs by beating Cardiff, only to fall back down the following year.

Wigan Athletic assistant manager Graeme Jones emerged as the early favourite to succeed Rodgers, but talks with Swansea are understood to have broken down.

The Latics are confident that Jones will remain committed to the club.

Swansea are searching for their fourth boss in three years following Rodgers's exit.

But Blackpool chairman Oyston says Swansea, who secured £7m in compensation for Rodgers and three backroom staff, have not been in official contact with his club regarding Holloway.

"I know it's manager silly season at the moment but we've not had a call from anyone enquiring about taking Ian as manager," said Oyston.

"[That] amazes me, I have to say, after what he has done here, what he has worked with and the way he has gone about things.

"I would think that would make him a prime candidate for other clubs to consider.

"However, surprisingly, and I am very pleased about it, we have not had any calls and I hope that continues."

The 1998 World Cup and 2000 European Championship winner has yet to test himself as a manager, but he completed the relevant Uefa pro-licence coaching qualifications on the Football Association of Wales course in Cardiff.

Desailly, like former Swans boss Paulo Sousa, is one of an elite band of players to have tasted Champions League glory in successive seasons as he won the European Cup with Marseille in 1993 and Milan in 1994.

Swansea chairman Huw Jenkins already confirmed that Jones, who has assisted manager Roberto Martinez at Swansea and now Wigan, has been contacted over the Liberty Stadium vacancy.

Jenkins, who is set to go on holiday next week, insists the Welsh club will take their time to appoint their new manager and will scour Europe in their managerial search.