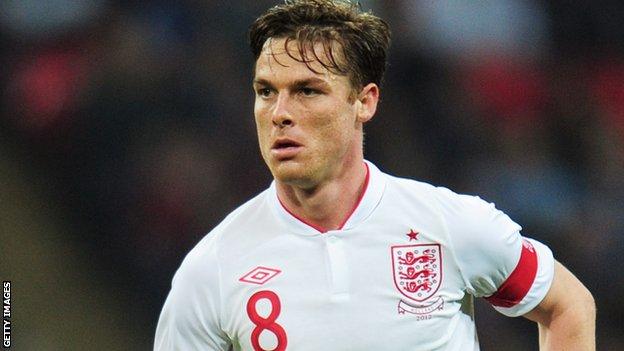 England midfielder Scott Parker is determined to seize his chance as he prepares for his first major tournament at the age of 31.

Since moving to in August 2011 for £5m, Parker has impressed and was named England Player of the Year in February.

"It's a massive tournament for me personally," he told BBC Radio 5 live.

"At 31 it's my first tournament so it's one I have been looking forward to for a long time and I am over the moon."

He added: "You always watch the games and wish you could be there or playing a part in it but for one reason or another it wasn't meant to be.

"I suppose now I am here I need to try to soak up every bit of it and do the best I can when I'm called upon."

The duo may have to be at their best if England are to make an impact in Poland and Ukraine.

"If you switch off for one second at the level we are at, then it normally ends up in the back of your net," added Parker at a civic reception, attended by the players in Krakow.

"Midfield is obviously a crucial part of a team and a game. You obviously need to win the battles in midfield and from there give yourselves a platform to go and attack and obviously be solid in defence.

"Under this manager we are going to have a very organised team, a team which is tactically aware and if you have to grind out results then that is how it has to be.

"But we have also got plenty of players in this squad who can go the other way and score some fabulous goals."