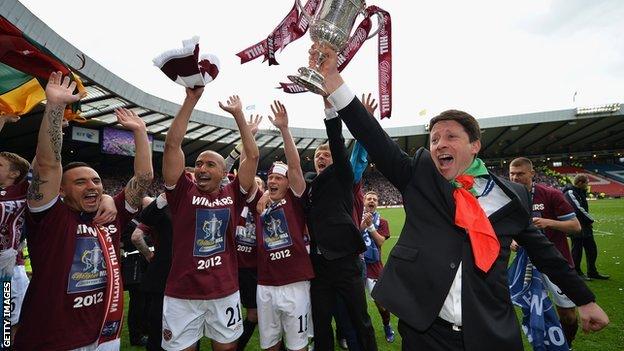 Hearts have announced that they have parted company with Paulo Sergio, their Portuguese manager.

Sergio, who led Hearts to Scottish Cup success in May, said he could not accept the offer made to him to stay.

A statement on Hearts' website said: "The club had been hopeful recent negotiations with Sergio would have a successful conclusion but he has opted not to extend his stay at Tynecastle."

First-team coach Gary Locke will remain at the Edinburgh club.

Hearts say they have begun to look for a replacement for Sergio, 44, who took over from Jim Jefferies after his sacking in August 2011.

One of the main contenders is thought to be another Portuguese manager, Jose Couceiro.

The 49-year-old has recently left his post as coach at Lokomotiv Moscow but is better known to Scottish football fans as the man who guided Kaunas to victory over Rangers in a Champions League qualifier.

I appreciate the road the club is now going down and respect what our board is doing. But I cannot accept the offer the club has made me

The club statement continued: "Paulo Sergio declined the offer of a new contract.

"We wanted to keep Paulo Sergio at Hearts and made what we believed was our best offer in the circumstances.

"The same terms will be available to other candidates willing to lead Hearts to new victories.

"We would like to put on record our appreciation of all his efforts, and those of Alberto Cabral and Sergio Cruz, in bringing the Scottish Cup back to Tynecastle.

"The search is already underway to find a new manager and we hope to make an announcement as soon as possible."

Hearts owner Vladimir Romanov has made it plain that he no longer wishes to maintain the same level of investment in the club.

His vision of Hearts' future is to develop their own young players and to operate with a lower wage bill.

Popular players such as Ian Black, Rudi Skacel and Craig Beattie are out of contract and look like they have played their last game for the Scottish Premier League side.

And David Obua, Stephen Elliott, Adrian Mrowiec and Gary Glen are among the 2011-12 first-team players no longer on the books.

Sergio said he "deeply regretted" that he would not continue his career at the Gorgie club.

"I appreciate the road the club is now going down and respect what our board is doing. But I cannot accept the offer the club has made me," he said.

"I want to say many thanks to everybody who worked with us, including our board, and special thanks to our supporters.

"I wish the very best to this great football club and I am now just one more Hearts supporter.

"I would also like to say thank you to all the players, who will be friends for life.

"And as for my future? Only God knows."

Sergio joined Hearts from Sporting Lisbon in his homeland, having previously managed Vitoria Guimaraes and Pacos Ferreira, as well as lower-league Portuguese clubs.