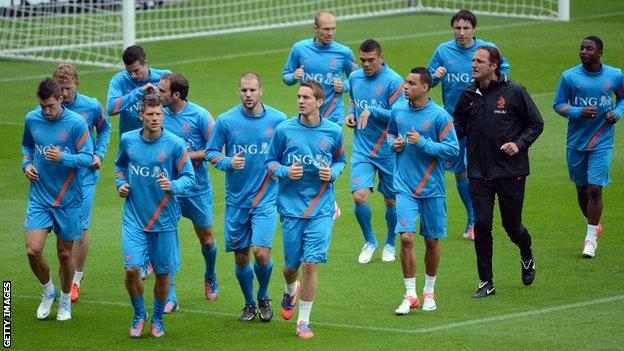 Uefa has confirmed there were "isolated incidents of racist chanting" aimed at Netherlands players during an open training session for Euro 2012.

But the governing body has not revealed whether it is investigating the incident in Krakow, Poland.

"Should such behaviour happen at further training sessions, Uefa would evaluate the operational measures to be taken to protect players," Uefa said.

"Uefa has now been made aware that there were some isolated incidents of racist chanting that occurred at the open training session of the Dutch team yesterday in Krakow.

"Uefa has a zero tolerance policy when it comes to discriminatory behaviour and has given the power to referees to stop matches in case of any repeated racist behaviour."

The Dutch FA said in a statement that it would not be making an official complaint but was "more than willing to answer [the] questions of Uefa in this respect".

Outlining the incident, the statement added: "As at one moment there was a lot of noise coming from a specific stand, the team decided to train at the other side of the stadium, which was much quieter.

"A few players have heard sounds, which could be described as possible monkey chants. However, the training staff on the pitch were not aware of this."

While Van Bommel complained specifically of racist abuse, the Dutch FA had earlier said this was mixed with anti-Euro 2012 chanting believed to have been prompted by the fact the city has not been given any matches in the tournament.

When this was put to Van Bommel on Thursday, he said: "Open your ears. If you did hear it and don't want to hear it, that is even worse."

"This training session occurred on Wednesday in the city of Krakow which is hosting three teams, including England. This is the last thing Uefa wants to hear and the news would have reached the England camp. They will train in front of several thousand fans on Friday and will be aware of what has happened. The issue of racism has stalked the preparations for this competition and once again it has reared its head."

The claims emerged on the opening day of the tournament, which is being co-hosted by Poland and Ukraine.

Around 20,000 fans had turned up to watch the training session at the Stadion Miejski on Wednesday.

He told BBC Radio 5 live: "As the Dutch players did their warm-up, during the first lap of the pitch they could hear monkey noises from one end of the crowd.

"When the players heard this they said they would do another lap and if they heard monkey noises again they would stop.

"The Dutch coach moved all the cones and started training on the pitch as far away from these people as possible. It was considerably more than two or three people."

The day before the alleged abuse, the Netherlands players had visited Nazi concentration camp Auschwitz, which is nearby.

Van Bommel said: "It is a real disgrace, especially after getting back from Auschwitz, that you are confronted with this.

"We will take it up with Uefa and if it happens at a match we will talk to the referee and ask him to take us off the field."

Euro 1988-winning Netherlands captain Ruud Gullit confirmed that racist chanting had taken place, and rejected suggestions that it was a protest from Krakow residents unhappy that their city was not hosting any matches.

"Yes, it happened - there were some monkey chants," he told a news conference for the Uefa-backed RESPECT Diversity campaign.

"I don't think, if you are frustrated at not having the tournament in your city, you do it in this way.

"It is sad that we have to talk about this, because football is all about joy."

Earlier this week, Uefa president Michel Platini said the issue was one for wider society, not simply football. But he added that referees had the power to stop games if there was racist abuse from the stands.

The tournament kicks off at 17:00 BST on Friday with hosts Poland playing Greece in the opening match in Warsaw.