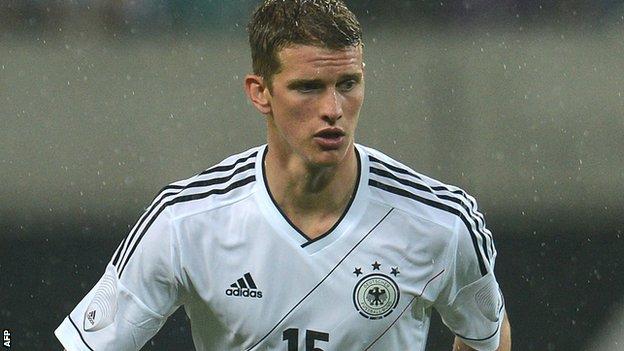 Bender has never played at right-back in his club career but has impressed in training after Loew reportedly fell out with usual first choice Jerome Boateng.

"I said before the tournament that a few players could find themselves playing in different positions."

If Bender starts, he can expect to have to deal with either Manchester United winger Nani or Cristiano Ronaldo, who arrives at the tournament after scoring 55 goals last season for Real Madrid.

The situation arose after ex-Manchester City defender Boateng was pictured with a glamour model in a Berlin hotel shortly before the German team flew to Poland on Monday morning.

"Jerome Boateng is fully focused because after causing these headlines he is a little bit in debt to me, because frankly I didn't like what I read," Loew said.

"I spoke to him about this and while he was doing all this during his time off, I didn't like what he did."

The last time the two teams met, Germany dumped Portugal out of Euro 2008 at the quarter-final stage after they claimed a 3-2 victory. Ronaldo insisted that match would have no bearing on the action at the Arena Lviv.

"I don't like using that term 'revenge' in football, because it's simply a football match, it isn't a war," the 27-year-old told uefa.com.

"We want to win, which is obvious, because we want to start the European Championship well."

Portugal needed a play-off to reach Euro 2012 and lost 3-1 to Turkey in their final friendly before the tournament. Despite the setbacks, head coach Paulo Bento urged his side to show bravery against the hotly-tipped Germans.

"You need to have courage because if you only think about defending, then surely you won't be able to get a good result," he said.

"Above all we have to be strong, aggressive and cohesive, especially when we lose the ball."