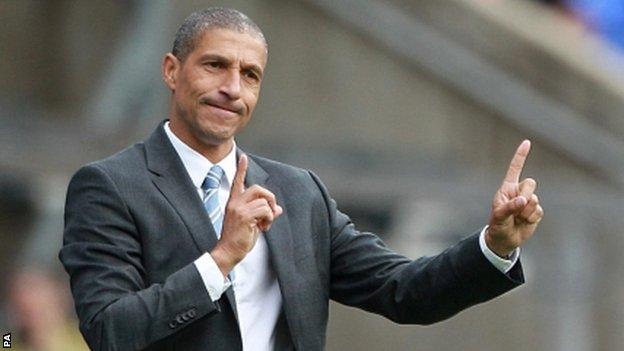 New Norwich City boss Chris Hughton has been promised the most "financial freedom" in the club's history.

The former Newcastle United and Birmingham City manager was unveiled as Paul Lambert's successor on Thursday.

"If we can create spare cash flows, the manager gets that. He's got a decent payroll budget and transfer budget."

Lambert, who has been was able to secure back-to-back promotions and a mid-table Premier League finish on a modest budget, buying players with little or no top-flight experience.

But a restructuring of the club's debts and a second successive year in the Premier League has put the Canaries on a solid financial footing.

"Chris has got our commitment that if any player leaves the club for money, he will get that additionally," said McNally.

"I think that's quite an attractive proposition for a hungry, committed manager like Chris Hughton. I don't think he had any spare cash to trade with at Birmingham."

He said: "In any walk of life, you don't want colleagues to be unhappy.

"Grant Holt happy at the club will be far more effective for us than Grant Holt being unhappy.

"Who knows what will happen over the next few weeks? Chris will sit down with all 25 first-team squad members and that will include Grant."

The future of Lambert's coaching staff at Carrow Road is also uncertain.

His assistant Ian Culverhouse and coach Gary Karsa are still at the club, despite Hughton bringing his own team of Colin Calderwood and Paul Trollope to Norfolk.

However, McNally seems ready to dig his heels in if Villa come calling for Lambert's former coaching duo.

"We were encouraging Paul to extend his coaching network, we felt it was a little narrow," he said.

"As talented as Ian and Gary are, we wanted more support for those two key people, so we think this is a great opportunity to do that. (But) In the same way Grant Holt is not for sale, it doesn't stop people making offers."

Meanwhile, full-back Russell Martin has signed a new three-year deal at the club.

The former Wycombe and Peterborough United defender has amassed 113 appearances for the Canaries, including a prolonged stint at centre-half last season.