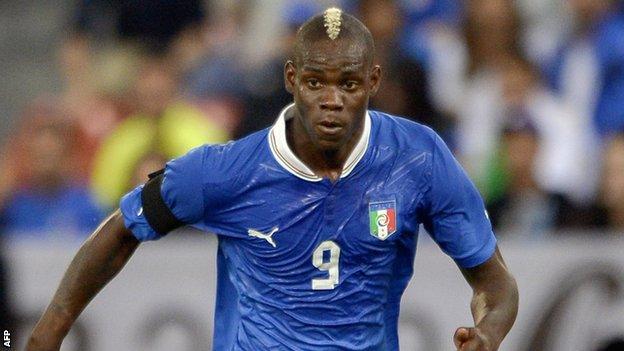 Gerard Pique says Spain must stop Italy dangerman Mario Balotelli if they are to start the defence of their European Championship crown with a win.

Spain head into the match in Group C as favourites for the competition, but Pique expects a busy afternoon against the Manchester City striker.

"We will have to keep a very close eye on him," the defender said. "Balotelli is a player that can win you a game.

"He is a player that can take the ball and score when you least expect it."

Italy have endured a troubled build-up to the tournament both on and off the pitch thanks to an on-going match-fixing investigation and three successive friendly defeats.

The last time scandal surrounded the Italy team they went on to win the World Cup in 2006, and Pique believed Spain must be wary of their opponent's threat whatever the circumstances.

"Italy are more dangerous when they appear not to be," Pique said. "They are going to be a very difficult rival, that will qualify and will be fighting for the tournament.

"It seems as Italy is hurt, not focused, but that is not the case.

"Just when you think they will not do a good job, they do the best job."

Italy's challenge in the opening game could not be harder, but Giorgio Chiellini was positive his side could trouble Vicente del Bosque's men.

"We have great motivation and belief that we can win this game," the 27-year-old Juventus defender told uefa.com.

"We are well aware that it will be a difficult start, the first game is always complicated.

"We will take to the pitch aware of the great qualities of our opponents but also with the knowledge that we can play our game, that we can win this game.

"We will try and match them but also cause them problems with our qualities. In all probability it will be a very exciting game."