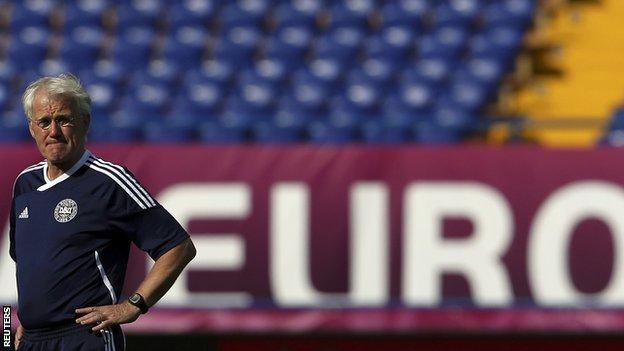 The 62-year-old feels his team are clear underdogs and is pessimistic about their chances of getting a win.

"We can say we are a little jealous of the Dutch team, that we are not in their shoes. They are the favourites. There is no doubt about that," he said.

The Danes shocked the footballing world with their triumph at Euro 92.

But their semi-final shoot-out victory in that tournament over the Dutch was their only success over them since 1967.

And Olsen feels it is an inferior record that will not be changed.

"Everything has already been said and written. They are a good team in all positions, and on the bench as well, they are filled with great quality," he said.

"We are playing against a better team. That's the realistic situation but it doesn't mean we will throw the towel in. Of course we would like to be the favourites because that means you are the better team."

Netherlands coach Bert van Marwijk admits his team are expected to win, but stressed the importance of keeping their focus.

"I think we are the favourites as well, but it will not be easy. You can make the comparison to two years ago (when Holland beat Denmark 2-0 at the World Cup en route to the final) but two years ago everything was new for me and for the players in a big tournament," he said.

"We have that experience now, but that just means you can't be complacent because you've done it before. We need to make sure we are as sharp as possible."

The former Feyenoord and Borussia Dortmund coach confirmed that centre-back Joris Mathijsen will miss the match with a hamstring injury, but will stay with the team.