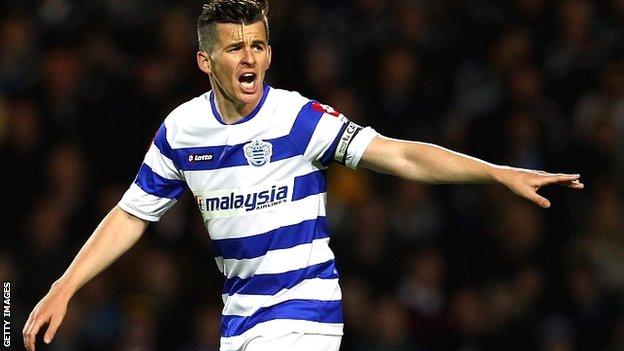 Joey Barton believes he would have featured in the England squad at Euro 2012 were it not for his behavioural problems on and off the pitch.

He will serve a 12-match ban next season for kicking Sergio Aguero and clashing with Vincent Kompany after he was sent off at Manchester City.

Barton, who won one England cap in 2007, has also criticised the selection of six Liverpool players.

He wrote on Twitter: "On ability I walk into the squad, on behaviour I don't."

The QPR midfielder, who began his career at Manchester City and spent four years with Newcastle, was in the news again last week when he was arrested, and later bailed, following a brawl outside a nightclub in his native Liverpool.

I really hope England do well and win it, I really do. All am saying is I don't think we will

On the pitch, Barton was also sent-off against Norwich last season, while he picked up 10 bookings.

The outspoken player, who won his only cap under Steve McClaren in a 1-0 defeat against Spain, was particularly critical of England coach Roy Hodgson's decision to draft in Liverpool midfielder Jordan Henderson following the injury to Frank Lampard.

Henderson is joined in the England squad by fellow Liverpool players Steven Gerrard, Glen Johnson, Stewart Downing, Andy Carroll and Martin Kelly, despite the Reds suffering a difficult season which saw them finish eighth in the Premier League.

They did win the Carling Cup and reached the final of the FA Cup, but that was not enough to prevent manager Kenny Dalglish from losing his job.

"If Henderson got in, any Englishman not currently in the squad has to feel aggrieved. Yes, I wish I was there but I'm not," he said.

"Everyone's thinking it, I'll say it. Liverpool have [had] an horrific season and have six players in our Euro squad. What chance do we have? [The England manager should] Pick on form.

Barton insists he still wants England to do well at Euro 2012, but he is convinced they are unlikely to win the tournament.

"I really hope England do well and win it, I really do. All am saying is I don't think we will," he tweeted.

"If everyone stays fit, we've got a decent 11 once [Wayne] Rooney's back.

"If any of the key players get a knock, we are done for. Three games in eight or nine days takes its toll on the body. If a few are carrying injuries from a long domestic season, it will show. Not being pessimistic, just a realist.

"I am overqualified to pass judgement on this. Not only have I played in the Premier League for 10 years but I've played with and against most of them."