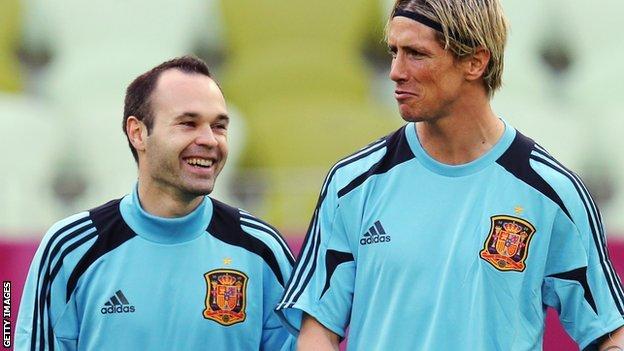 Spain manager Vicente del Bosque believes midfielder Andres Iniesta will be a key man as they attempt to retain their European Championship trophy.

The holders come up against Italy in their opening game, before playing Republic of Ireland and Croatia.

"He [Iniesta] is in fine shape and will be decisive in the six matches we hope to play here," said Del Bosque.

"He is enjoying his football, and the doubts we had about his fitness two years ago are absent this year."

The Spaniards won their second European title in 2008 with a 1-0 triumph over Germany in the final, and are hoping to become the first nation to successfully defend it in Poland and Ukraine.

Fernando Torres scored the only goal of that game against Germany and, having won the FA Cup and Champions League with Chelsea, will be hoping to make the starting line-up in the absence of star striker David Villa, who was unable to fully recover from a broken leg to play at the tournament.

With defender Carles Puyol also out with a knee injury, it places extra emphasis on the fitness of experienced playmaker Iniesta before Sunday's game against Italy.

"I am in good shape and full of confidence and I feel like I am in optimum playing condition," he said.

"It's true that before both the last European Championship and the World Cup I always had a problem and this time it's not the case. What I focus on is feeling good and in this case I have achieved that."

The midfielder, 28, added that he does not regard himself as a leader, but Barcelona team-mate Victor Valdes disagrees and believes Iniesta is an inspiration to the rest of the side.

"Andres is a player who has never liked the attention that comes with being called a leader, but he is certainly a leader on the field," said goalkeeper Valdes. "His way of playing, his way of being makes him that."