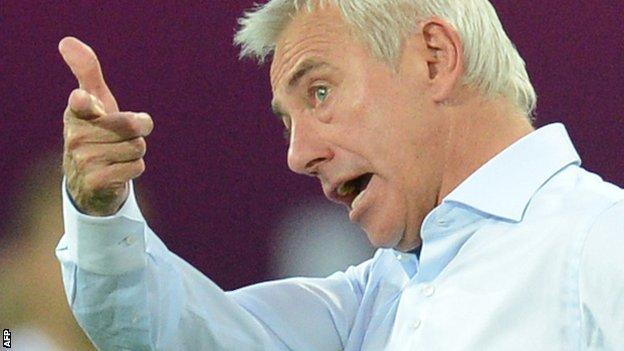 Netherlands coach Bert van Marwijk felt his side were denied a clear penalty in their surprise 1-0 defeat by Denmark in the opening Group B encounter.

The Dutch dominated and had 29 shots, only to lose out to Michael Krohn-Dehli's well-taken first-half goal.

A frustrated Van Marwijk admitted his team were wasteful in front of goal but said a late handball by defender Lars Jacobsen should have been punished.

"It is such a clear penalty, and then you likely get a draw," he said.

Defender Jacobsen handled the ball while under pressure from substitute Klaas-Jan Huntelaar, but referee Damir Skomina waved away the Dutch appeals.

"When there's a penalty that doesn't go in your favour, it's unfortunate. But that's part of the game."

But although aggrieved at the penalty decision, Van Marwijk was well aware his team's finishing was not good enough.

Robin van Persie and Arjen Robben had the best opportunities, but they were by no means alone in their profligacy.

"There were maybe four, five or six players who had a lot of chances, and the referee also had a chance," Van Marwijk added.

"We created an improbable number of chances but, if you fail to finish, then this happens.

"We lost our power after 70 minutes through our way of playing and also because we kept missing chances. Then you have to change your approach of the opponent and we failed to do that.

"We had all those chances, but the ball didn't want to go in. There was a lot of space. We put our substitutes on, we were more attacking, and we had more chances."

The Dutch now face a difficult task to progress from the group many see as the toughest in the tournament.

Netherlands must play Germany in their next fixture on 13 June, followed by Portugal on 17 June.

But Van Marwijk remained defiant. "I refuse to throw in the towel," he said. "Now it is clear we have to beat Germany.

"We showed that we can play good football and create chances, while we proved in the past that we can beat Germany. It's not going to be easy, but that's the goal now and everyone knows that."

Dutch captain Mark van Bommel was at loss to explain how his side lost.

"It [Krohn-Dehli's goal] was the only dangerous action of Denmark," Van Bommel said. "I'm speechless, because these three points are very important."

Despite having just eight shots compared to 29 by the Dutch, Denmark coach Morten Olsen claimed his team were the better side and deserved their win.

Recovering from a bad start

The last time the Netherlands lost their opening group game in the European Championship was in 1988 when they were beaten 1-0 by the Soviet Union. They went on to win the tournament, beating the same opposition 2-0 in the final.

"You saw a Danish team who overall were the better team and also, over the last 10 minutes, were better physically than the Dutch team - that was very important," said Olsen, who has been his country's boss for 12 years.

"We said it before the game - if we have to beat one of these teams, we have to reach a high level to get good individual form and a good team performance - and that happened.

"Of course, the Dutch team had some chances but I thought we also had chances. We had good positional play and trusted our own way of playing football.

"That was especially important against a Dutch team who like to dominate. It was important to show how and why we qualified for this tournament."