was the surprise of day two at Euro 2012 - and not just because of the result.

The Dutch chalked up 29 shots on goal, but hit the target only six times on a day when Arsenal striker Robin van Persie appeared to lose his shooting boots.

Van Persie was the Premier League's top scorer with 30 goals last season, but he was one of several Dutch forwards who failed to turn their team's superiority into goals. That left Denmark's Michael Krohn-Dehli to score what turned out to be a first-half winner, on 24 minutes.

Former Netherlands midfielder and BBC pundit Clarence Seedorf says Van Persie's performance showed playing for his country is a tougher task than for his club.

Clarence Seedorf on Match of the Day

"This happened to Robin van Persie at the 2010 World Cup. He takes on the responsibility for the team - maybe too much. He should be flying after a season like he has had [with Arsenal]. I think he's not relaxed enough. When he plays for Arsenal, it's a different Van Persie.

"For Netherlands, I think it's a matter of determination. They were confident that they would have the game in their hands and they would score a goal.

"They were unlucky - they didn't deserve to lose, but something they missed was the energy. They needed to be be more aggressive, but you didn't see it, and there were a lot of shots from outside the penalty area.

"After 15 or 20 minutes of the second half when they started to play well again, I began to see a difference. But the defence was far away from the strikers and the team split into two, so that cost them the energy they needed to find more spaces."

"In football, you can talk about what you deserve or don't deserve. But in the end, Netherlands ran out of ideas. The final pass, the final move, the final dribble was not there.

"Denmark's defending got better and better as the game went on. They looked full of energy at the end. It was a deserved victory and it is one of the greatest nights in Danish football history." 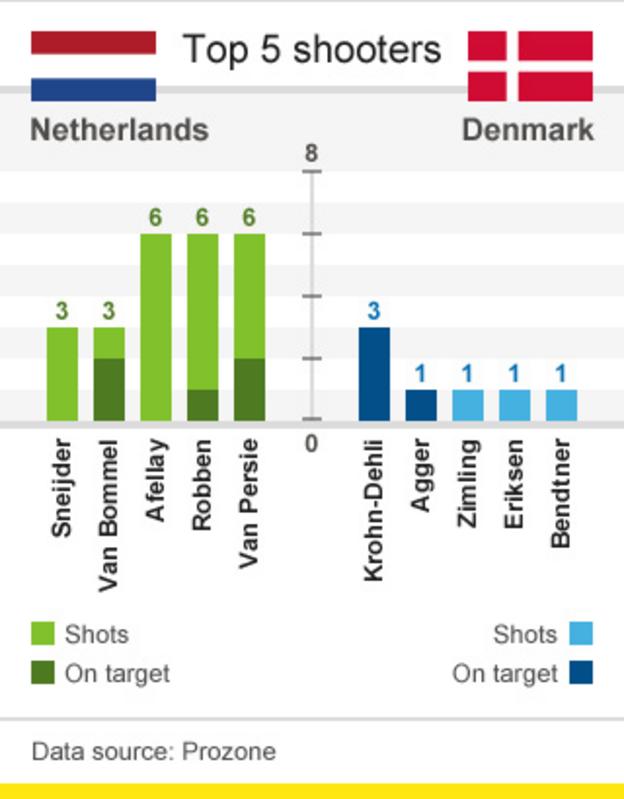 What they said about Denmark's win:

"The goal was the only dangerous action of Denmark. I'm speechless, because these three points are very important." - Dutch captain Marc van Bommel

"It was not only Robin van Persie. There were maybe four, five, six players who had a lot of chances. And the referee had also a chance to give us a penalty." - Netherlands coach Bert Van Marwijk

"We know the Dutch, they can be very dominating. If you get scared of them, they can play really good football. We played them the right way." - Denmark coach Morten Olsen