When David Villa was ruled out of the European Championship with a broken leg, coach Vicente del Bosque was faced with the decision of how to replace Spain's all-time leading goalscorer.

He opted not to go for a like-for-like replacement in Sunday's 1-1 draw against Italy, with Cesc Fabregas, Andres Iniesta and David Silva the Spanish players operating furthest up the pitch.

Indeed, Iniesta's five shots was more than any player on either side, with Fabregas and Silva's three attempts next on the list of shotmakers, level with Italy's Antonio Cassano.

When Fernando Torres came off the bench to replace Fabregas he wasted two good chances. So are Spain better off with or without a specialist striker in their forward line?

Lee Dixon on Match of the Day:

"Spain played with six midfielders and no forwards. They tried to draw the Italian defence out and hit the space behind.

"It was very effective at times, but the game changed when Torres came on. With him up front, the Spain build-up play was different.

"With Spain's quality in their squad, with the likes of Torres and Fernando Llorente on the bench, they will still be a force to be reckoned with."

"Spain mirrorred Barcelona's style, with a flat back four then a 1-2-1-2 formation, with two forward players of Silva and Iniesta - and Fabregas having a free role.

"In the first half, the Italians played well. They were dogged but also created chances. Spain did not get enough men high up the pitch and they were fortunate not to be behind.

"The Italy goal woke Spain up, and they pushed on and began to play with a higher tempo." 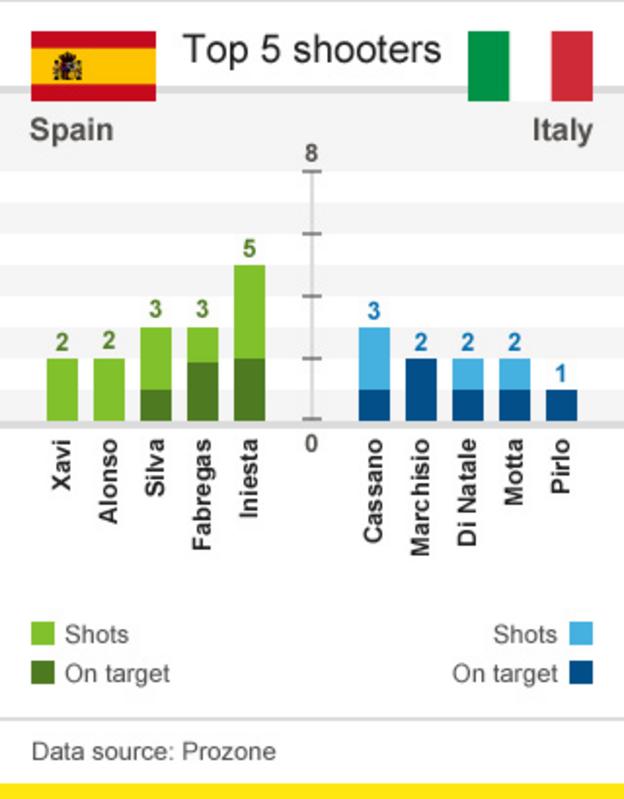 What they said about Spain's forward line:

"We wanted to have superiority in the midfield so that we could have possession and arrive higher up the pitch. David Silva, Cesc and Andres Iniesta arrived very well from the second line of attack and I think they did very well in a lot of moments." - Spain boss Vincente del Bosque.

"Fernando, Fernando, do you not realise you could be playing for the very existence of centre forwards?" - Gary Lineker on Twitter.

"Torres looks a threat. Spain much better with him on team." - Robbie Savage on Twitter.

"We were a little surprised with Spain's line-up but we agreed that we needed to focus on our own game." - Italy boss Cesare Prandelli.