I really felt for the Republic of Ireland's players after Sunday's defeat by Croatia and I know how much their fans will be hurting too.

I have played alongside most of those players and know how much pride they take in wearing the shirt and representing their country.

They take any defeat really badly but they will really be feeling it now because it was such a big occasion.

After waiting 10 years to qualify for the finals of a major tournament, to begin Euro 2012 with a result like this will be tough for them to take. And conceding three bad goals after being so sound defensively recently - and being unbeaten for 14 games - is even tougher. 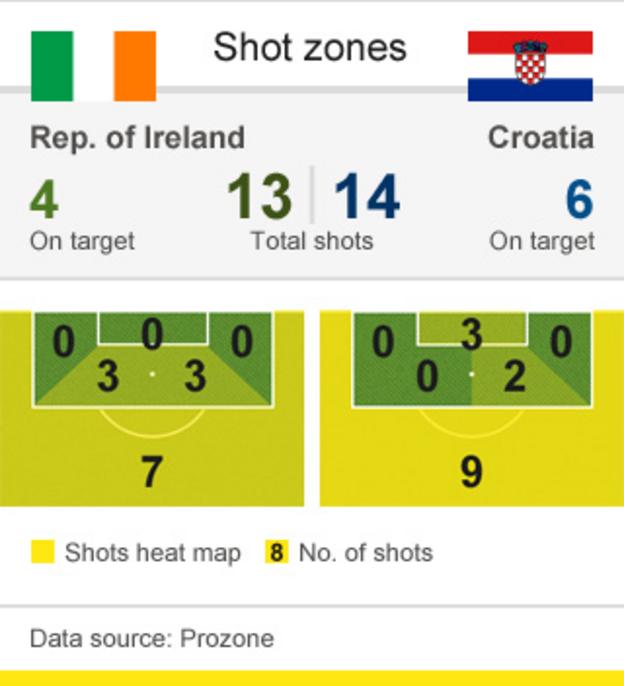 The job for Republic manager Giovanni Trapattoni is to lift his squad, especially because their next match is against World and European champions Spain.

I remember playing under Trapattoni in a defeat by Russia at the start of the qualifying campaign for this tournament.

We lost 3-2 but could have been beaten by five or six goals - we were that bad, and a lot worse than the Irish played in Poznan.

He did not get angry that day and he will have kept his calm with the players this time too. That is the way he works, no matter what he is feeling inside.

And I don't think he will approach the Spain game too differently to the way he approached the Croatia match.

Seeing Mario Mandzukic put Croatia ahead so early on was a blow but Ireland got themselves back into the game.

Their second goal was the crucial one as Ireland went into half-time on the back foot and never recovered. Mandzukic's second of the game, to make it 3-1, was basically game over.

But for long periods, especially in the first half, I don't think Ireland were that bad.

The stats may show that Ireland's pass-completion rate was low but that was not a problem. They played it long to Kevin Doyle but he was holding the ball up and linking play really well.

Equally, Croatia did not tear us apart either. They were shooting from long range much of the time and Ireland conceded three bad goals rather than defended badly.

What Trapattoni might get some stick about in the papers is his decision to bring on Simon Cox when the score was 3-1, and to play him out of position on the left wing when he had Stephen Hunt and James McClean - who are both natural left-siders - sat on the bench.

Maybe he should have brought on McClean instead, just for his impact factor, and the lift seeing him come on would have given the fans.

Also, McClean could have created something for the strikers, while Cox is better when he is up front and getting on the end of crosses rather than delivering them.

The result takes the shine off what has been an enjoyable few days in Poznan.

It was a joy to be in the stadium on Monday and be part of an incredible atmosphere that both sets of supporters contributed to.

I have to give special praise to the Ireland fans, though, because they have been so vocal since they arrived in Poland and it has been lovely being around them.

It was madness in Poznan's main square the night before the game and very different to my experiences as part of the Ireland squad in Japan and Korea at the 2002 World Cup.

It was the first time I had the chance to go out and witness the occasion and the whole scene.

Before the game, the BBC Radio 5 live commentator Alistair Bruce-Ball asked me whether I have missed being part of the squad at this tournament.

When I saw the lads warming up it did give me a little bit of regret, but when the national anthem was sung that was when it hit home that I wasn't part of it.

Hearing that and seeing the Irish fans' reaction to Sean St Ledger's goal were obviously big positives but the defeat overshadowed everything for me.

Realistically it means we need at least four points from our last two games, playing against two of the greatest football nations in the world in Spain and Italy.

When you think about it like that, then it is such a big ask. But I know the team will not be giving up yet.