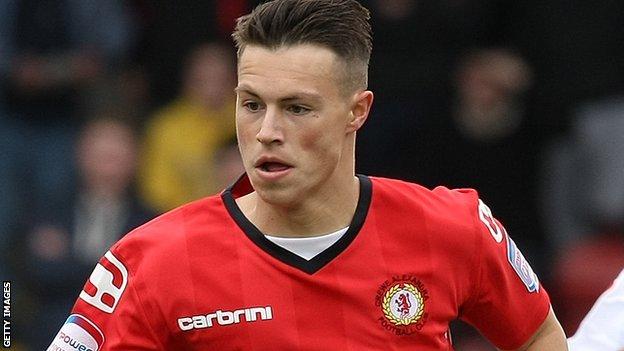 The 20-year-old Wales Under-21 striker has been offered a new contract at the County Ground but has yet to commit to the deal and is a target for Crewe, where he finished the season on loan.

"It's not an invitation to him but it's better if he leaves," said Di Canio.

"He said 'if I don't play regular football I'll move on somewhere else' and that means he wants to leave."

Di Canio told BBC Wiltshire: "We will have an attacking side with four or five strikers.

"Billy Bodin can ask for regular football in League One - and maybe he will become the best striker in the world over the next two years - but I don't see that he can have this expectation."

Bodin, who came through the club's academy, made his first-team debut in the 2010-11 season.

He struggled to keep a first-team place under Di Canio last term, spending time out on loan at both Torquay and Crewe.

Gulls boss Martin Ling expressed an interest in signing the young forward but a deal was not reached.

And Di Canio feels that Bodin is not ready to make the step-up to another level with the League Two champions, who will be in League One next season with Crewe.

"I can't teach him that football is difficult," continued the Italian.

"At Crewe, he went and played the first few games and was then dropped.

He needs to become a man, work hard every day and take sport seriously

"It wasn't because he was a bad player but, in a good football team, there is a system where you could play two games on, one game off.

"He's going to find it difficult to play in League One or the Championship in the future but he could have it if he changes his mentality.

"He needs to become a man, work hard every day and take sport seriously. He's still very young in the way he thinks."

Di Canio, who offered a two-year deal to Bodin last month, added: "It is clear he doesn't want to accept it.

"It's up to him. We've offered him the contract. If we can't keep hold of him, I hope he has a great career in the future."