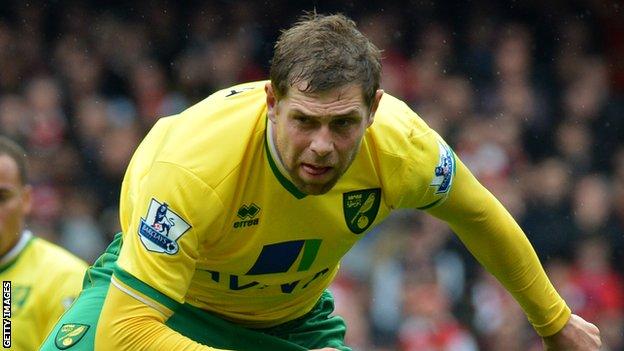 Striker Holt, who has two years left on his contract, has

"It was a surprise. I spoke to the big man a couple of times. He's made the decision for his own reasons," Martin told BBC Radio Norfolk.

"Hopefully it's not done and dusted yet and there is a way back for him."

New Canaries boss Chris Hughton has made it clear he wants Holt, top scorer last season and a three-time player of the year, to stay and the striker has been told he is not for sale by chief executive David McNally.

Martin added: "If [he does not stay] he's had a great three years here and I'm sure everyone will remember him fondly. But he's still a Norwich player and hopefully we can keep it that way."

Meanwhile, Martin has committed his immediate future to Norwich by agreeing a three-year contract.

The 26-year-old, who has amassed 113 appearances since joining from Peterborough United in November 2009, says he had no doubts over signing a new deal despite uncertainty over Holt's future and the

"Once the manager was gone, I was still intent on signing a new deal. I'd love to see out my career at Norwich. But you never know what's going to happen with managers coming in and things like that," he said.

And the Scotland full-back is looking forward to linking up with the incoming manager after speaking to former Wycombe team-mate Mike Williamson, who played under Hughton at Newcastle United.

"I'm looking forward to meeting him and working under him," he said.

"I've spoken to a very good friend who played under him at Newcastle - he said he's one of the best he's worked under.

"And all the boys here, having spoken to a few of them, are very excited."