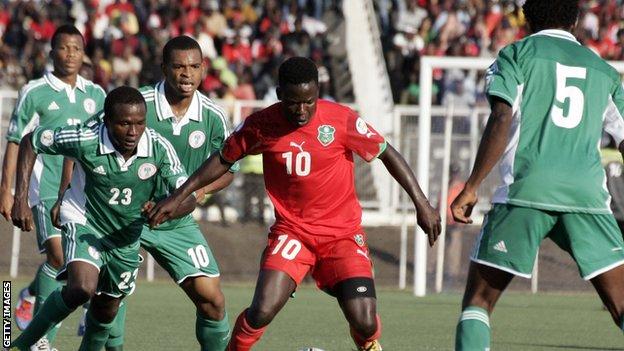 Coach Stephen Keshi says he aims to "build a very strong team for Nigeria", following their 1-1 draw with Malawi in World Cup qualifying on Saturday.

The Super Eagles took the lead with only minutes to go in Blantyre but then conceded an equaliser in stoppage time.

They top Group F with four points from their two games so far.

The boys are developing, they are progressing, [but] it's going to take a while

"The equaliser was a shame - I thought we had the three points, but a lack of concentration gave them away," Keshi told the BBC.

"The kids have fought very hard but that's football."

The Nigeria team were missing several big name players - including injured captain Joseph Yobo, and Osaze Odemwingie and John Obi Mikel, who were both left out of the squad.

Keshi insisted that he is building a team for the future.

"I am very happy - the boys are developing, they are progressing, [but] it's going to take a while.

"I still have some other players who are not here that I'm going to give an opportunity for them to come in and play - and try to build a very strong team for Nigeria."

Nigeria have another match this weekend, when they host Rwanda in the second leg of their 2013 Africa Cup of Nations qualifier.

That game is being played in Calabar and Nigeria have to win, because the first leg ended in a 0-0 draw.

"We will go home and readjust whatever mistakes we made [in Malawi] and take it from there," Keshi said.