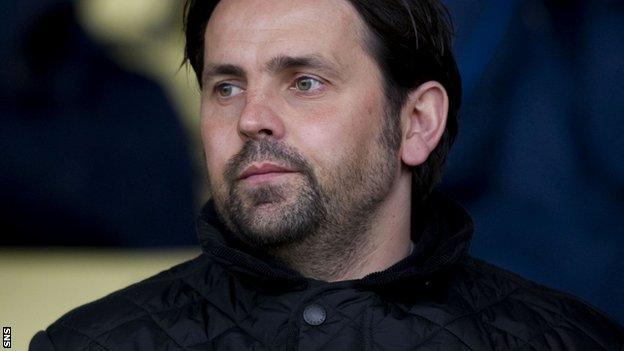 Former Hearts goalkeeper Craig Gordon believes Paul Hartley would be a popular choice to fill the managerial vacancy at Tynecastle.

The Edinburgh club are seeking Paulo Sergio's successor after the Portuguese left the club last week.

"The fans are going to be looking for an ex-player and a name that they know," Gordon told BBC Scotland.

"(Hartley) does jump to the top of the list of candidates."

First-team coach Gary Locke has taken temporary charge at Hearts as the club search for a replacement for Sergio, 44, who took over from Jim Jefferies after his sacking in August 2011.

Jose Couceiro, formerly in charge of Lokomotiv Moscow and Kaunas, has been strongly linked with the post.

However, Hearts director Sergejus Fedetovas has told BBC Scotland that the Portuguese coach will not be offered the job.

And Gordon, 29, who is searching for a new club after leaving Sunderland, believes Hearts supporters would prefer a manager with previous links to the Tynecastle outfit.

Hartley, current Alloa boss and former Hearts captain, guided the side to the Third Division title last season and has impressed since his appointment at Recreation Park in May 2011.

"They would give someone like that a lot of support and time to get the job done," Gordon said.

"There are financial constraints there, as there are with most clubs.

"Paul Hartley has had success in the very short time he's been a manager and certainly comes to the front of everybody's minds for that position.

"I think he could go back in there and do the job. It would be a big step up for him from where he is at the moment.

Gordon, who transferred to Sunderland from Hearts for £9m - a record fee for a British goalkeeper - in 2007, suffered from injuries throughout his time on Wearside.

He missed several months of the 2008-09 season with a knee injury, and a broken arm saw him sidelined for three months the following season.

A second fracture of the same arm kept him out of action until November 2010, but later surgery on his anterior cruciate ligament saw him sidelined for eight months.

Since his release by Sunderland he has been linked with a move back north of the border, with Celtic and Hearts both reported to be interested.

"I've had a few bits and pieces of contact from different clubs but I'll take my time and see what the best offer is over the summer and see where next season takes me," he said.

"I'm quite relaxed that it will all get sorted out and I can get some first-team football under my belt."